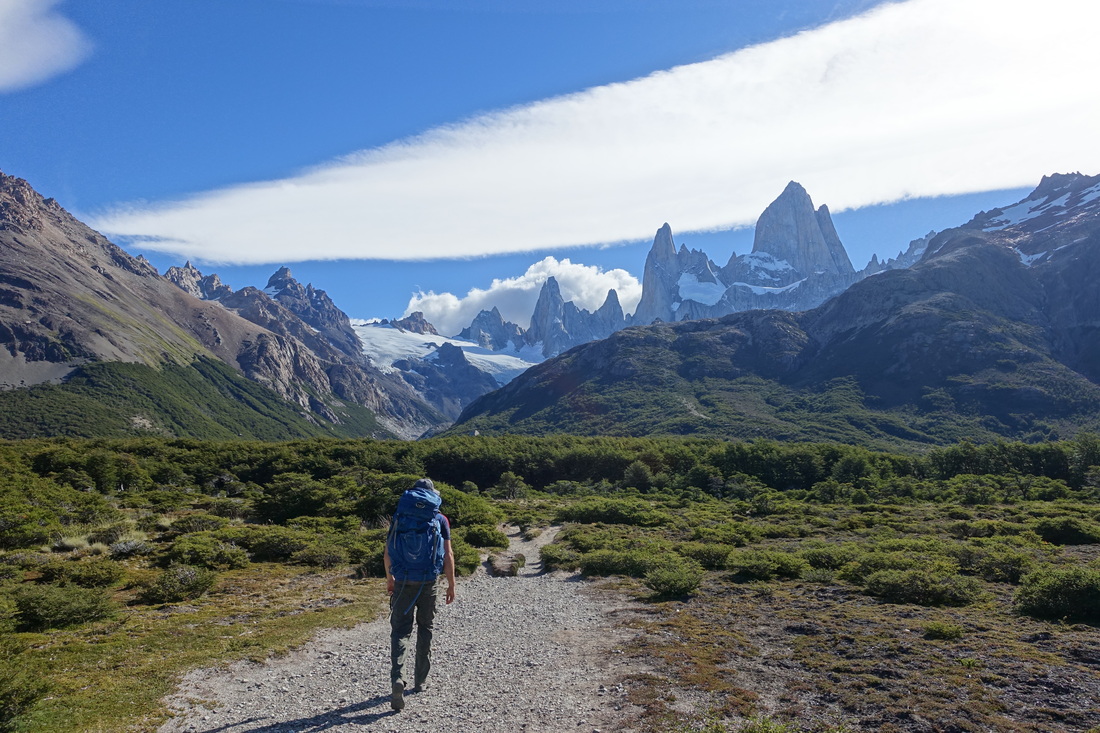 Approach hike from El Pilar Hosteria
The best experience in Patagonia is hiking in the El Chalten region around the Mount Fitz Roy in Argentina.  The hiking is relatively easy compared to most trips on this website and the area can be enjoyed by anyone able to walk 10-15 miles. 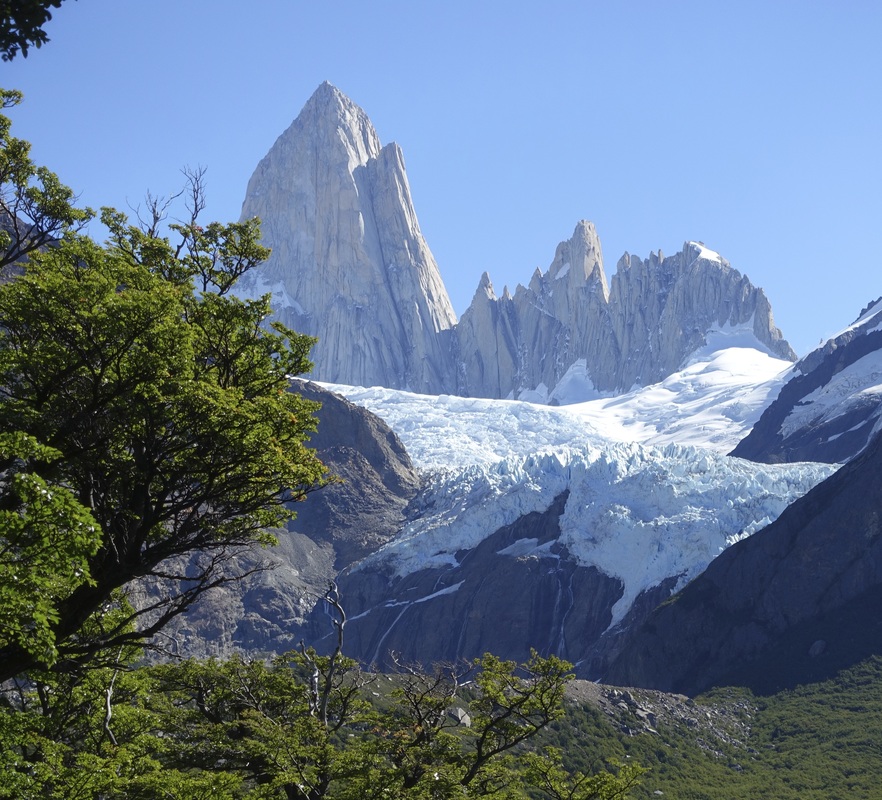 The three areas to visit around Fitz Roy that do not require permits are Laguna de los Tres, Laguna Torre, and the overlook above Laguna Torre called Loma del Pliegue Tumbado.  You can also get free permits to walk off-trail in some of the valleys from the visitor center 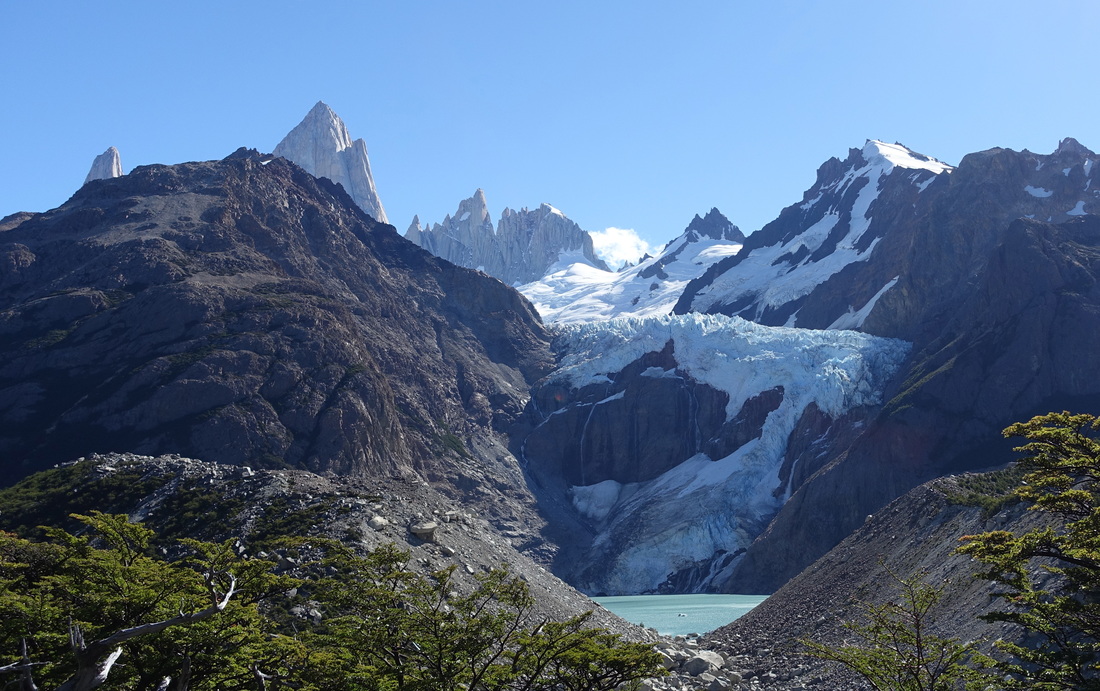 Mirador Piedras Blancas
Starting the trek to Laguna de los Tres from El Pilar Hosteria lessens the elevation gain and allows for views of the Piedras Blancas glacier.  Shuttles can be hired from town. ​ 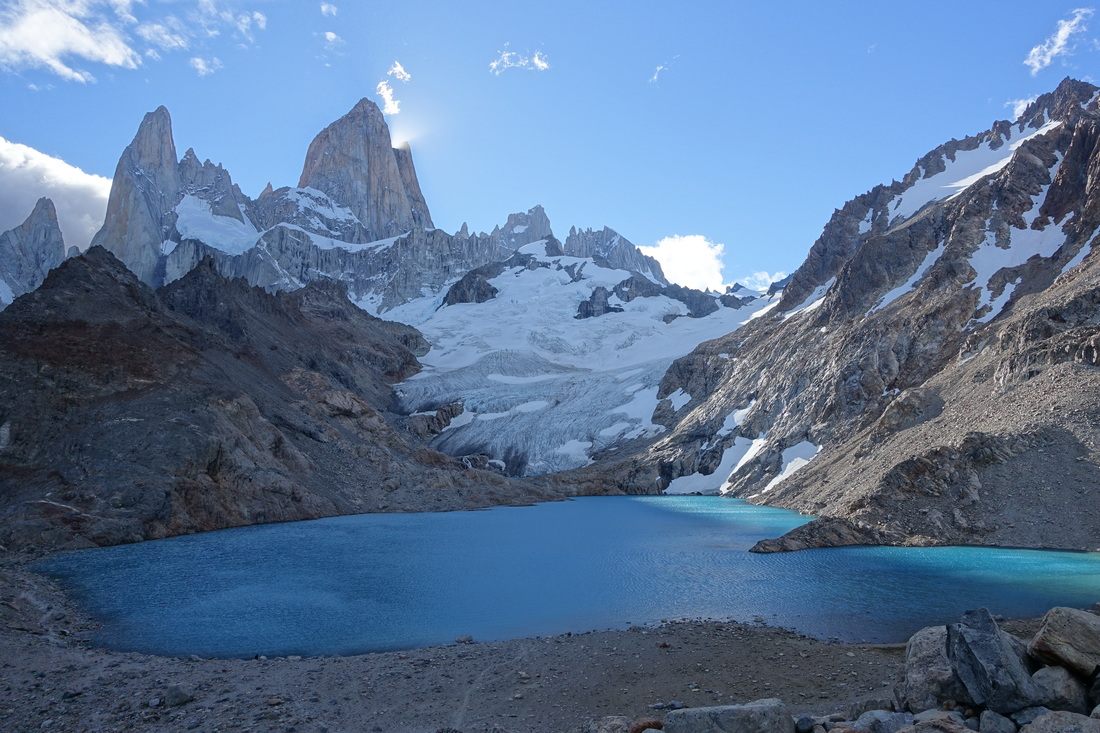 Laguna de los Tres beneath Mt Fitz Roy
The most popular option is to hike back to town after taking the one way shuttle to the hostel.  Many people combined Laguna de los Tres with Laguna Torre as a short backpack although both can be completed as dayhikes 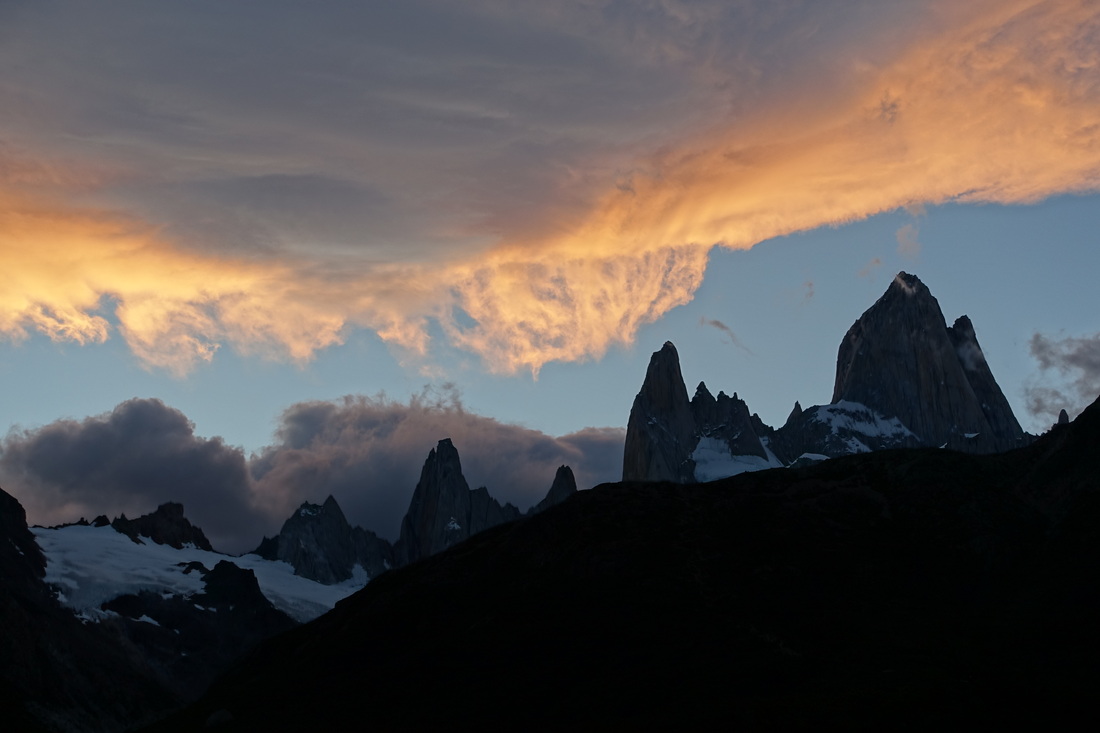 View from Campamento Poincenot at sunset 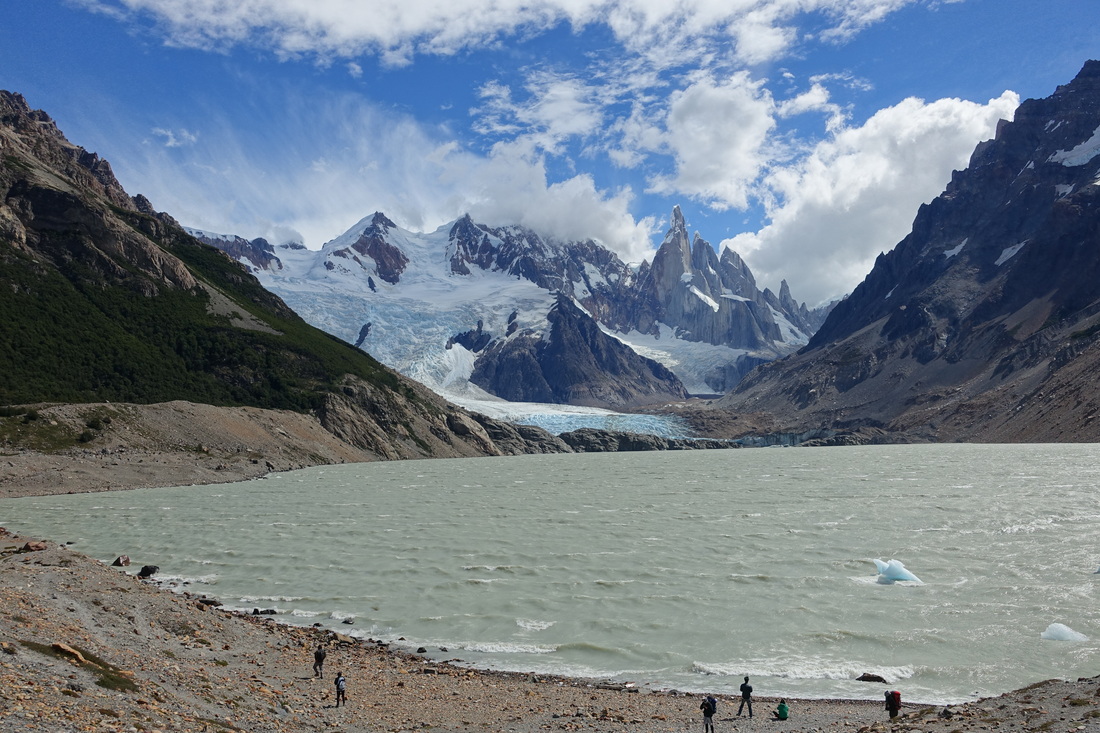 Cerro Torre from the Laguna 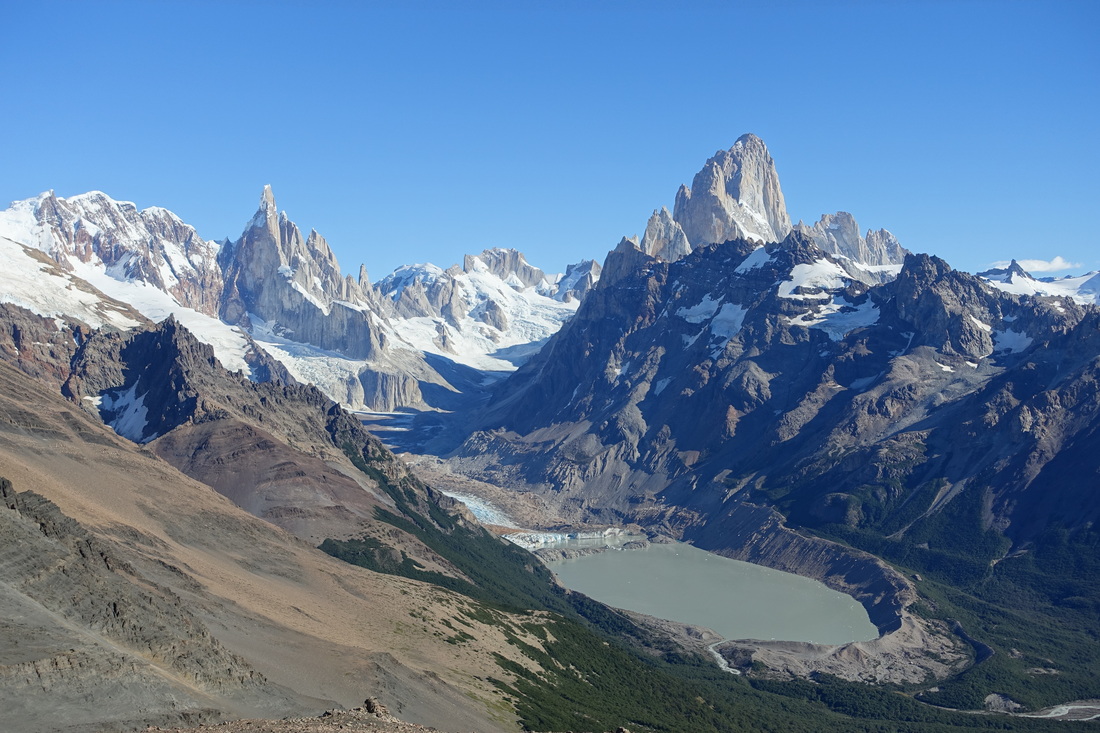 The lesser traveled of the hikes in the El Chalten region is to Loma del Pliegue Tumbado (12 miles roundtrip, 3300ft elevation gain).  There is also a shorter hike to Mirador Condores that is a good spot for sunrise. 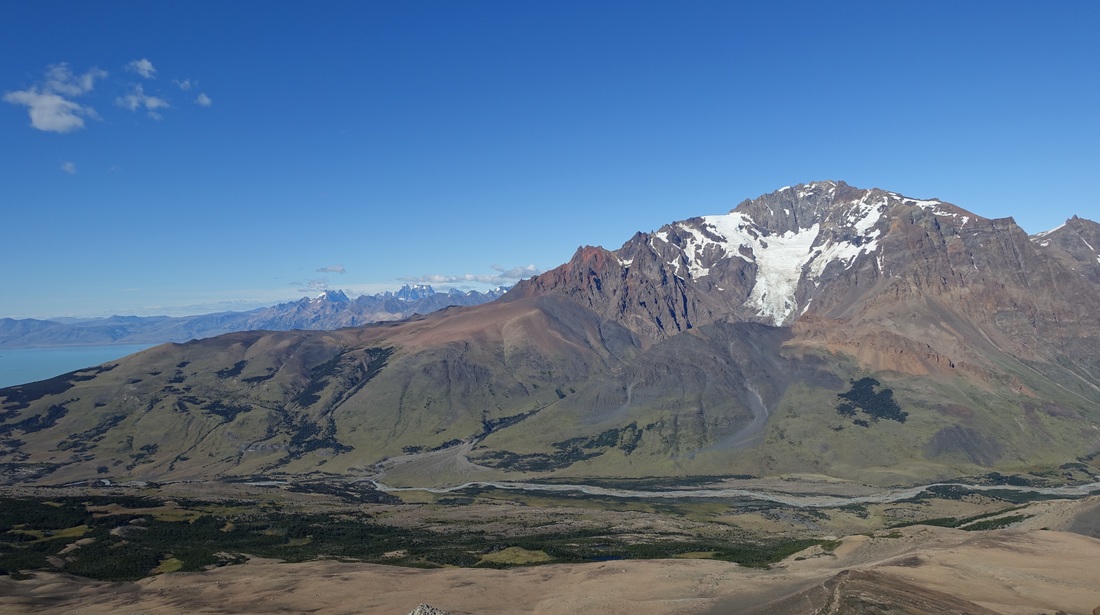 The most accessible glacier is at Perito Moreno and can be seen from a boardwalk, a few hours drive from El Chalten

The glacier was breaking off from the heat of the afternoon sun, a great experience 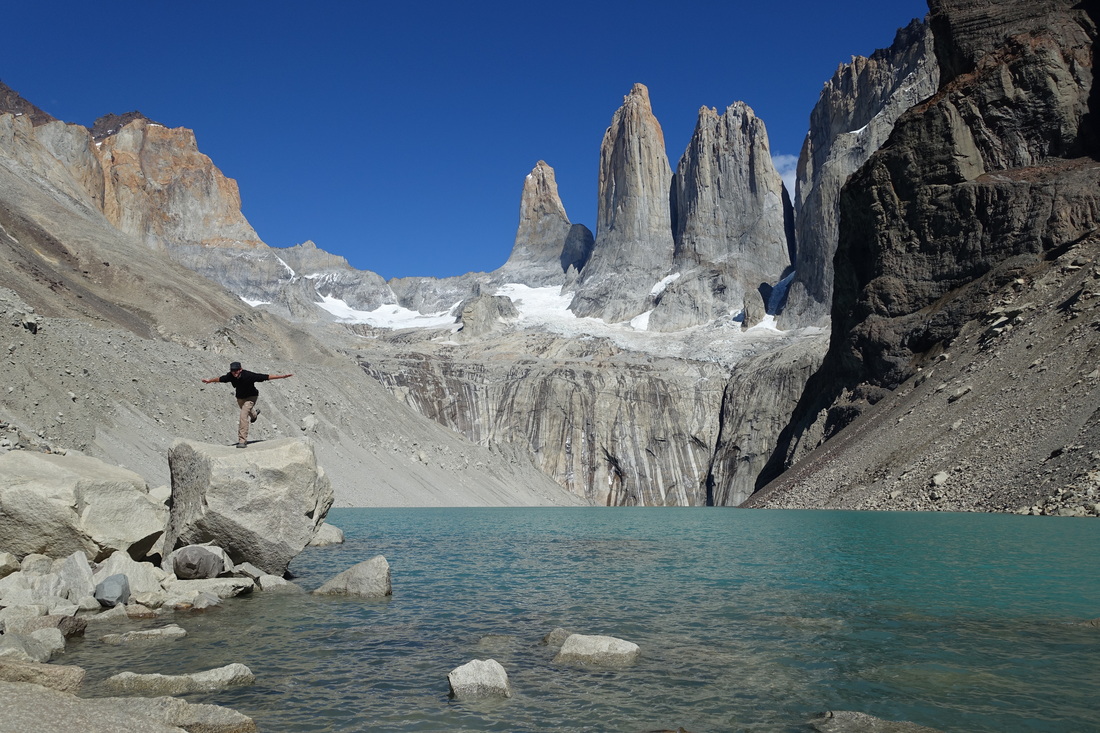 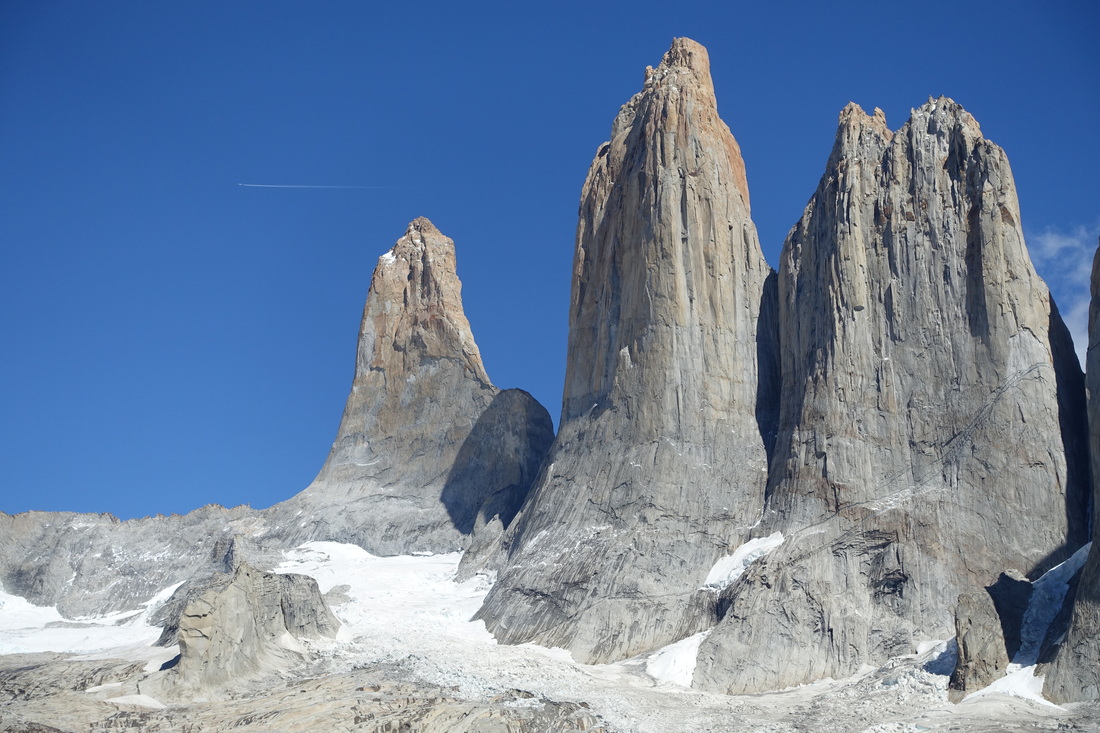 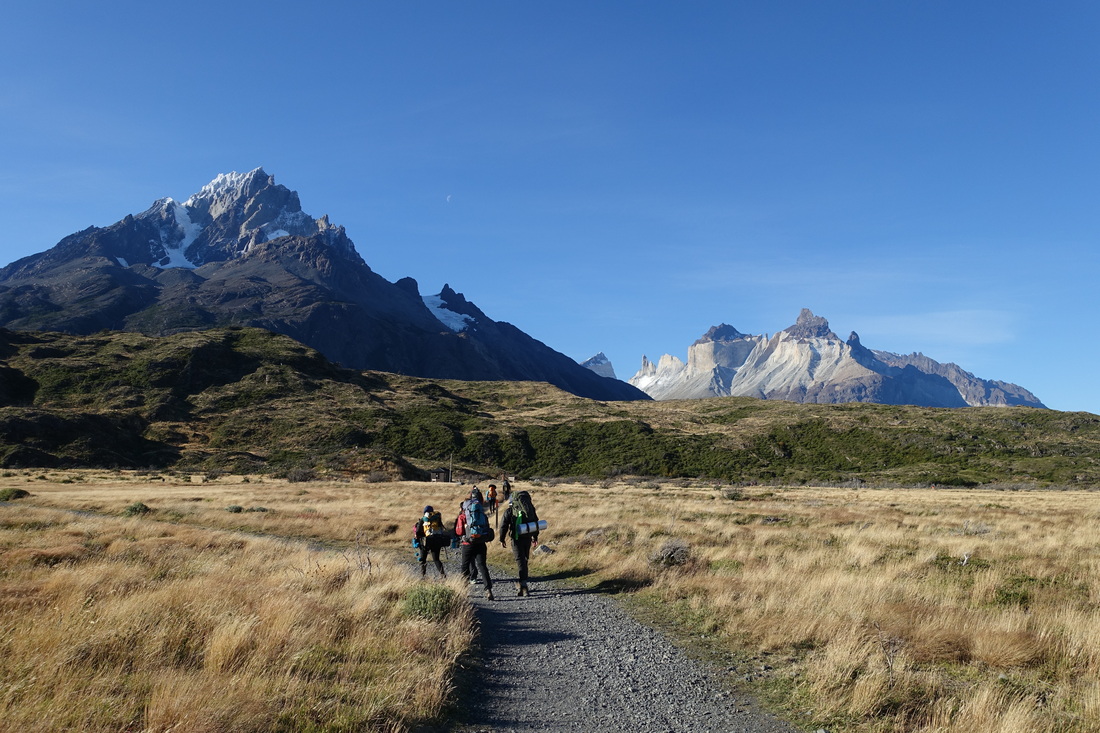 A day hike from Refugio Paine Grande up the French Valley is possible by taking the evening Catamaran the night before the hike (16 miles round trip, 2000ft elevation gain).  It would be difficult to see the entire valley if taking the morning boat since it does not arrive until 10am.  Payment for the boat shuttle is taken on board in Chilean pesos 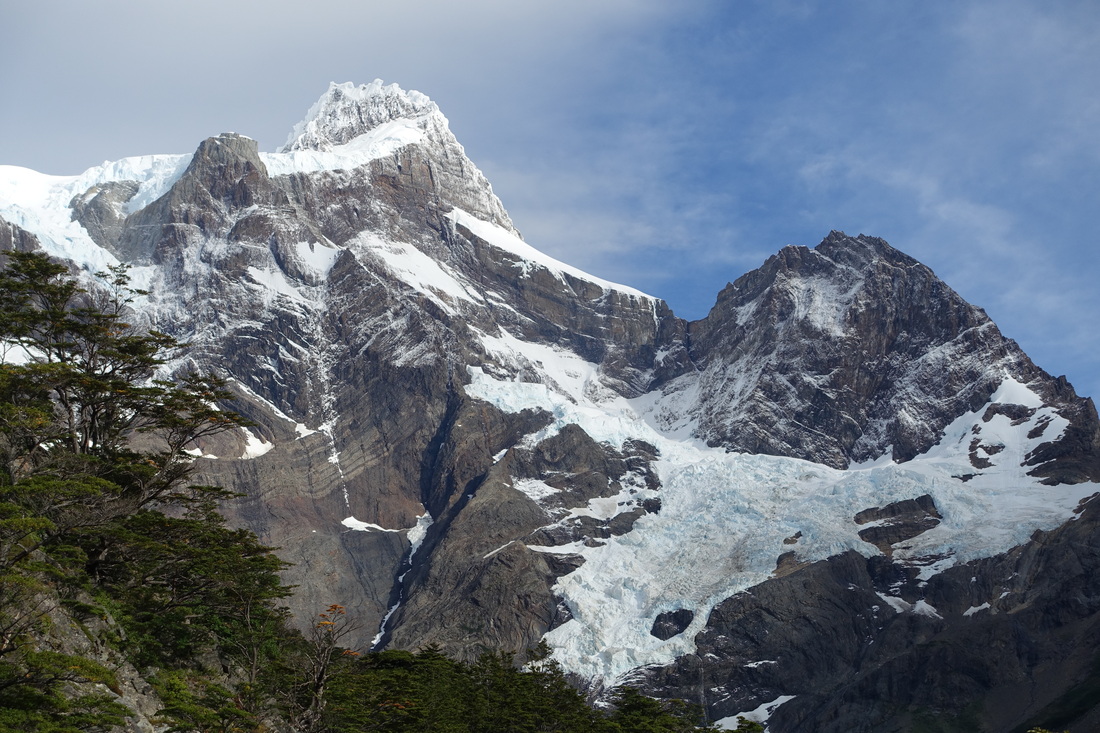 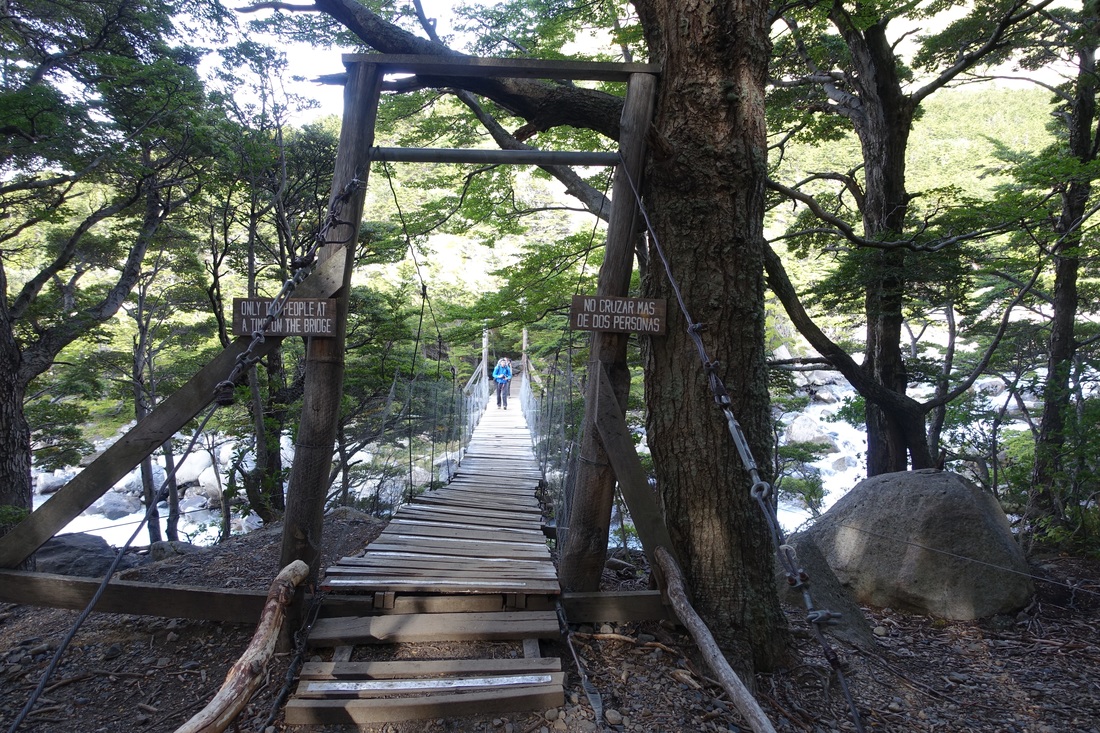 Bridge on the way to the French Valley 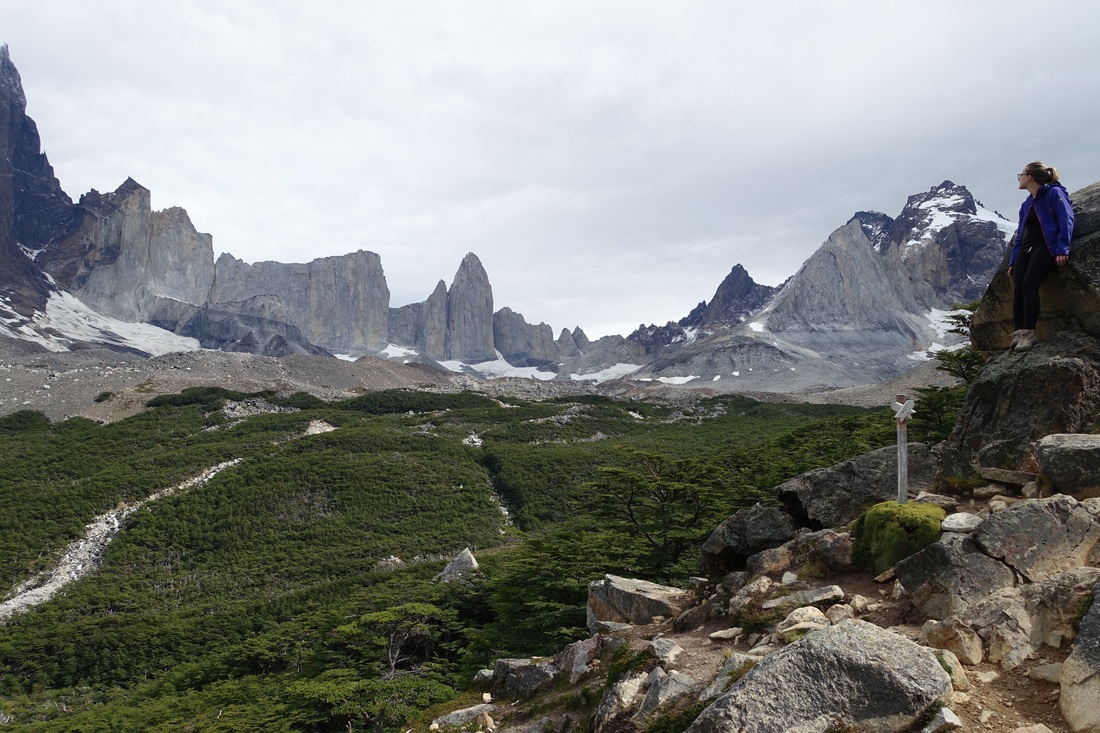 I had difficulty getting permits and completed the "W" walk as separate day hikes camping in the areas near the hotels.  Pre-bookings would be advised if wanting to walk the "O" or "W" circuit (​Vertice Patagonia and Fantastico Sur are the companies in charge of the campsites and refugios in Torres del Paine) 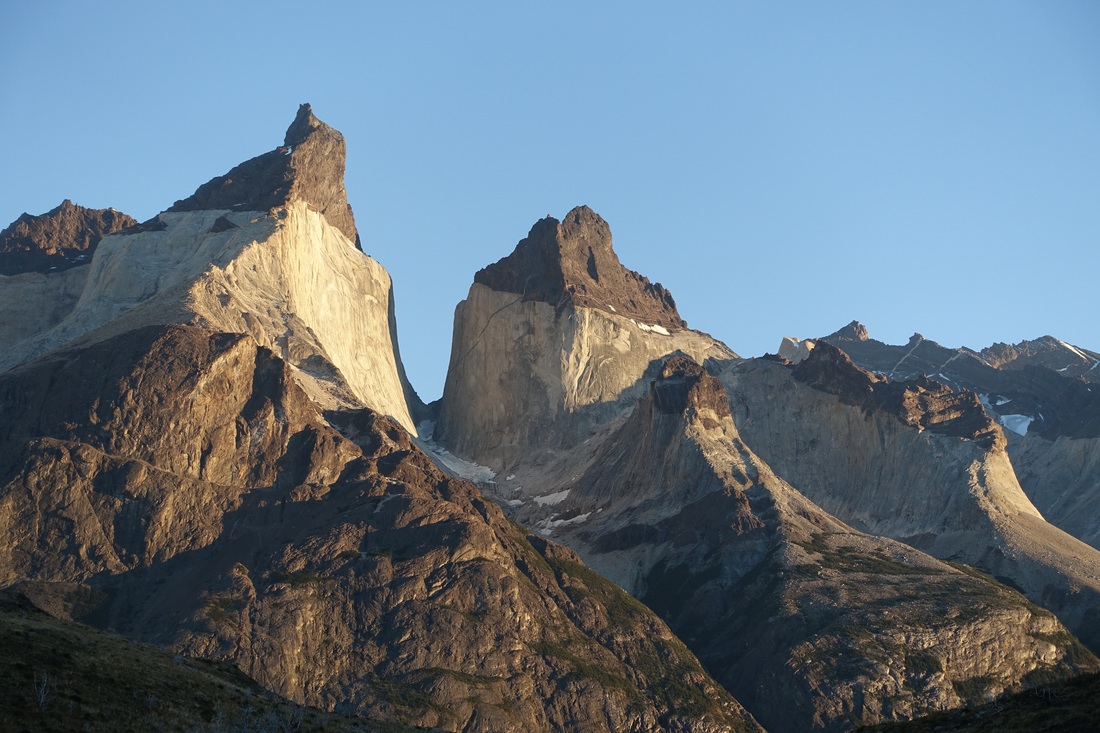 Cuernos del Paine
There is also a short hike that offers views of the "cuernos" or horns of Paine from across the lake that starts at Salto Grande (5 miles roundtrip).  There is no significant elevation change, although the trail is in a strong wind area 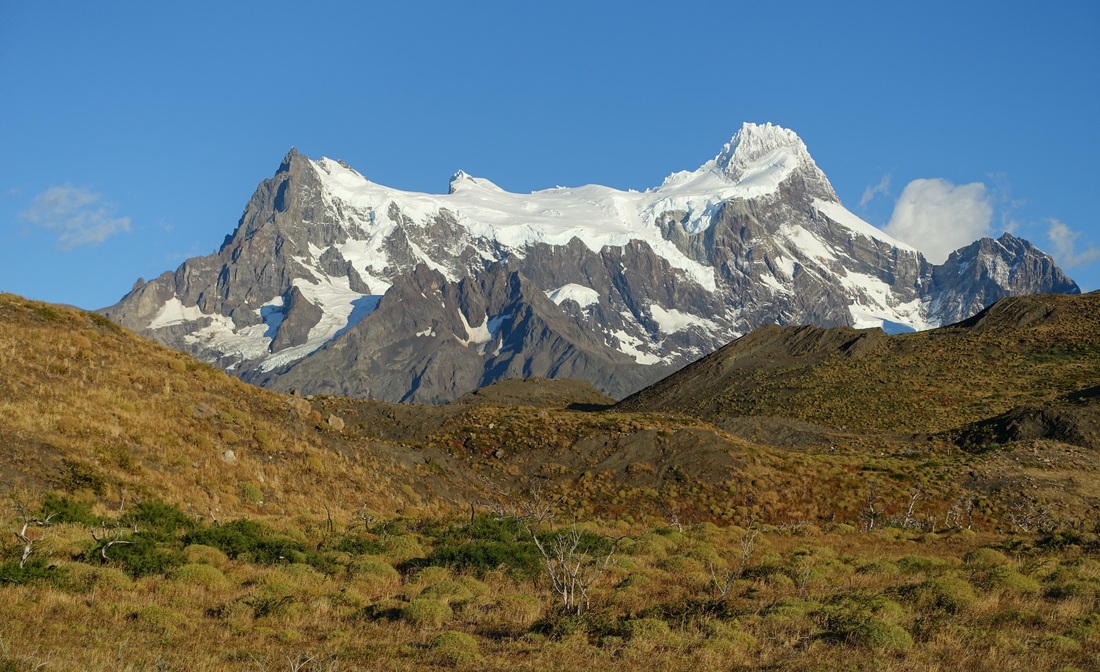 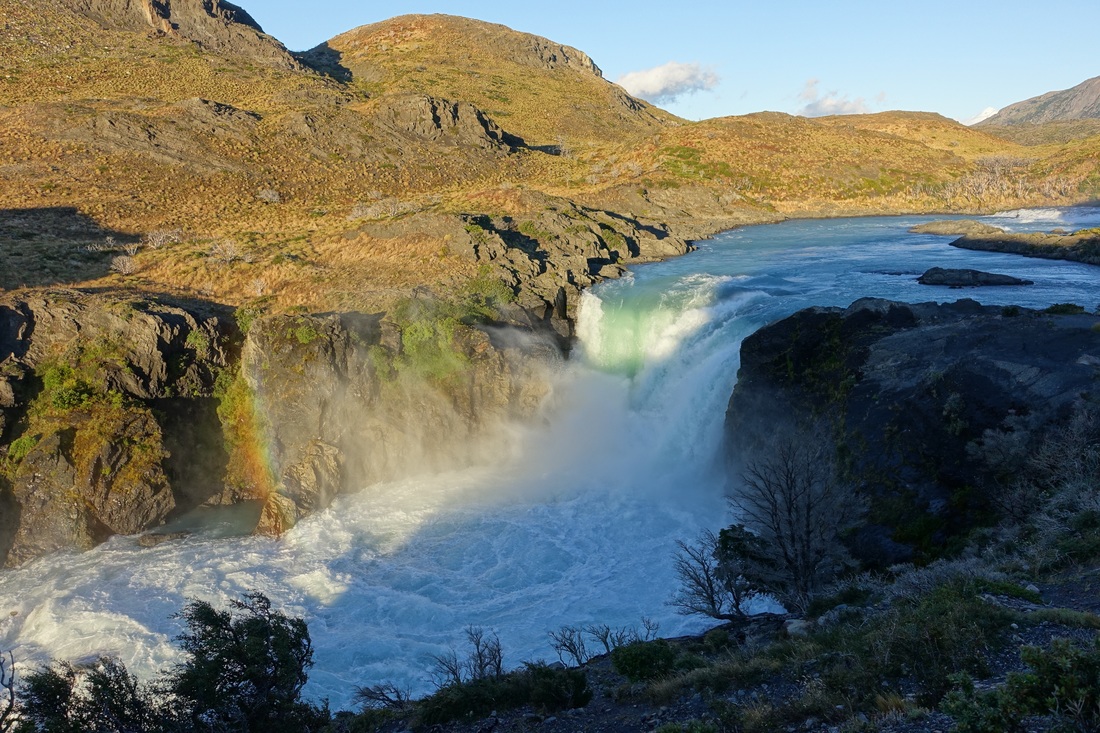 Watching sunrise on the Paine Horns 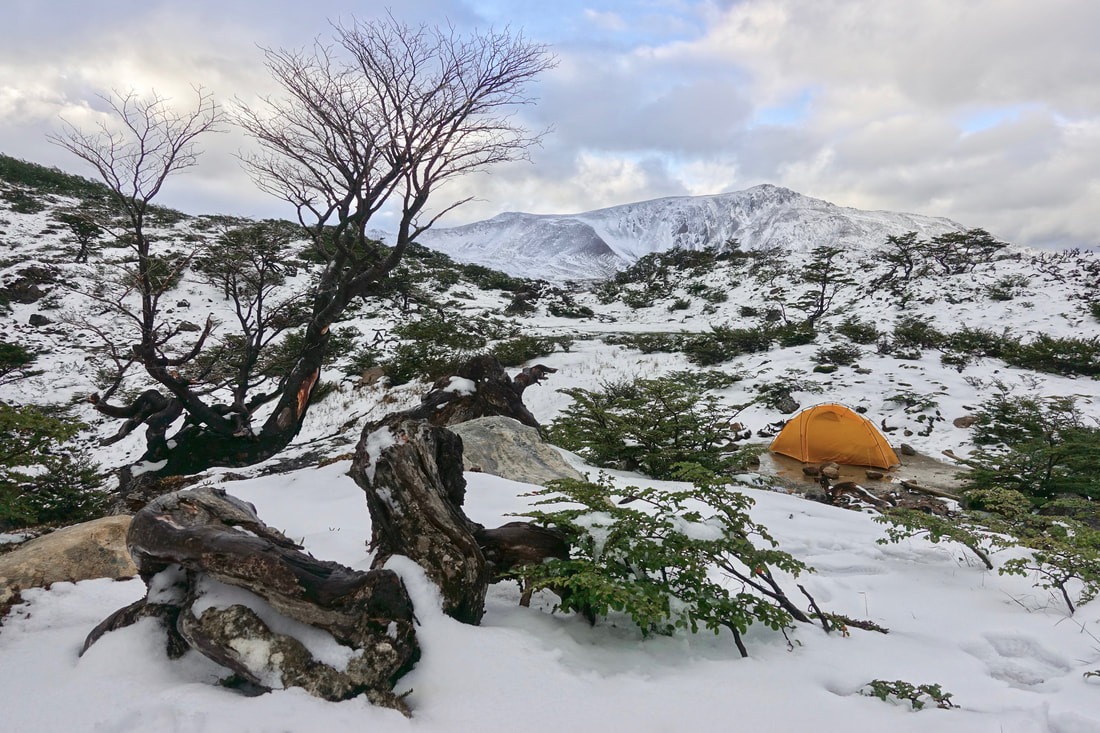 A more remote experience can be found further south on Isla Navarino walking the Dientes Circuit (33 miles, 6500ft elevation gain).  The $240 USD boat transfer fee from Ushuaia keeps some from doing the walk 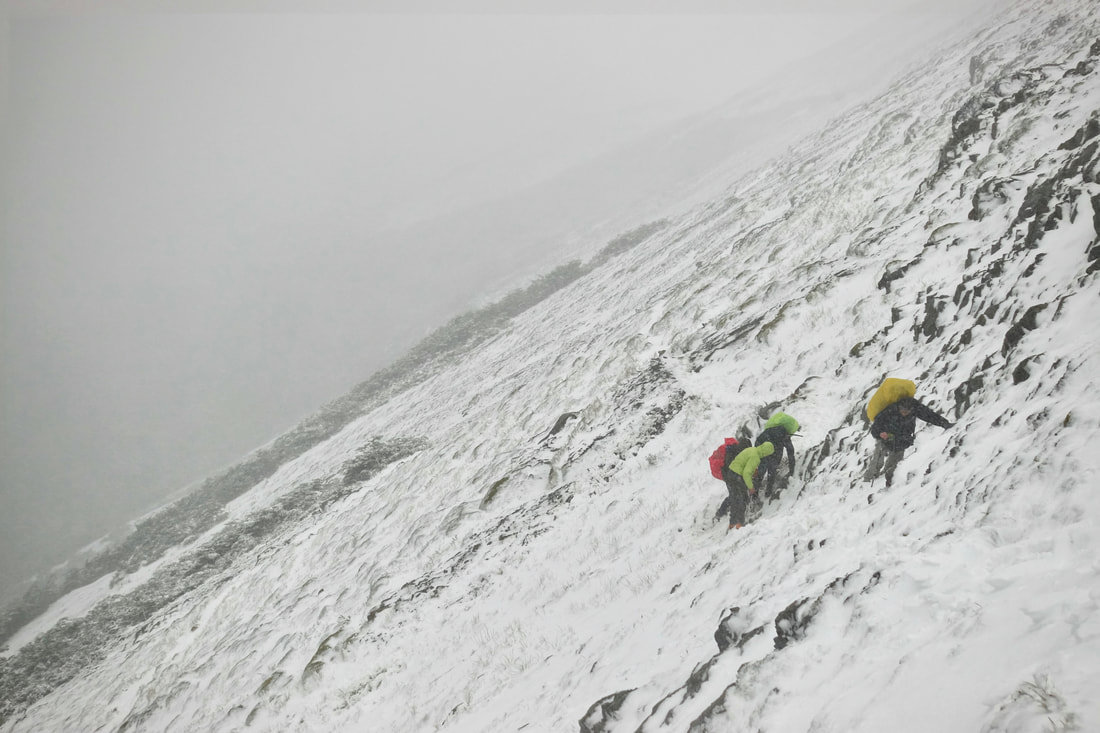 Weather also keeps some away, shin deep snow and strong winds on the side hill slopes of Cerro Bandera in mid-summer 2019 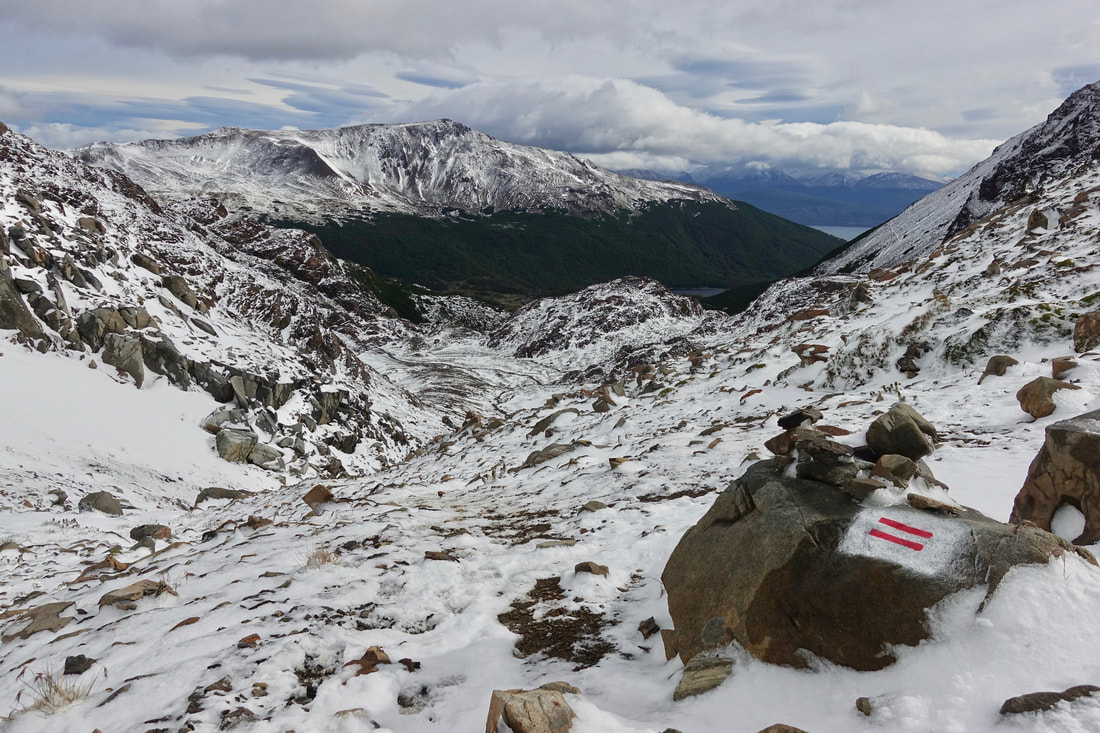 The track is well marked with red horizontal slopes, visible even with the snowfall 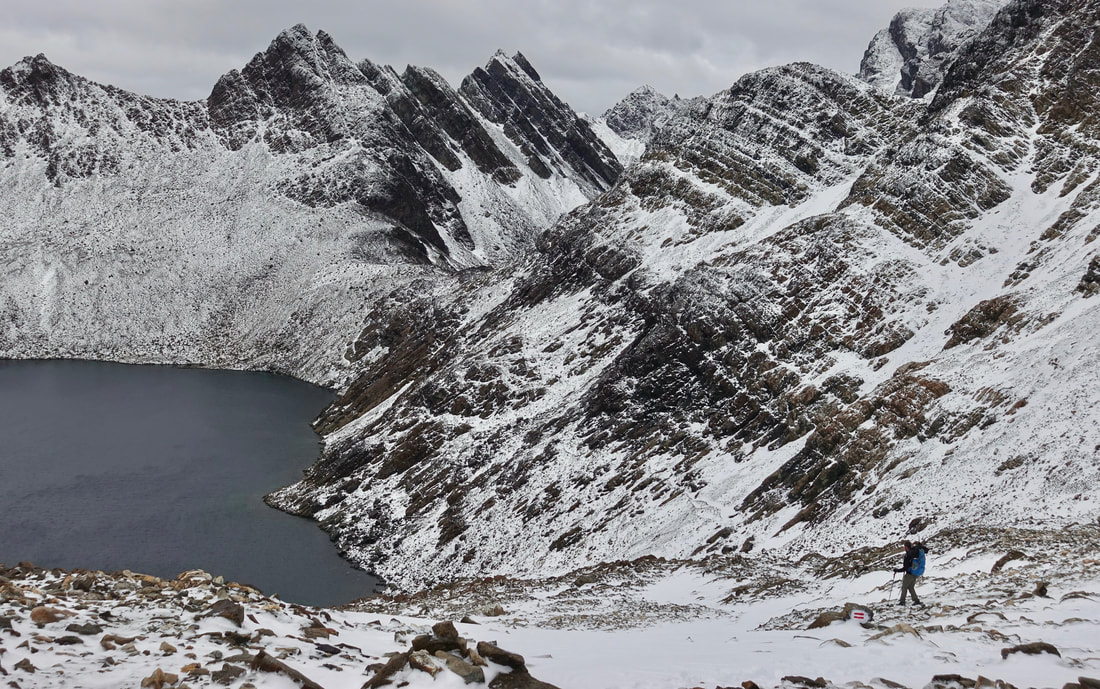 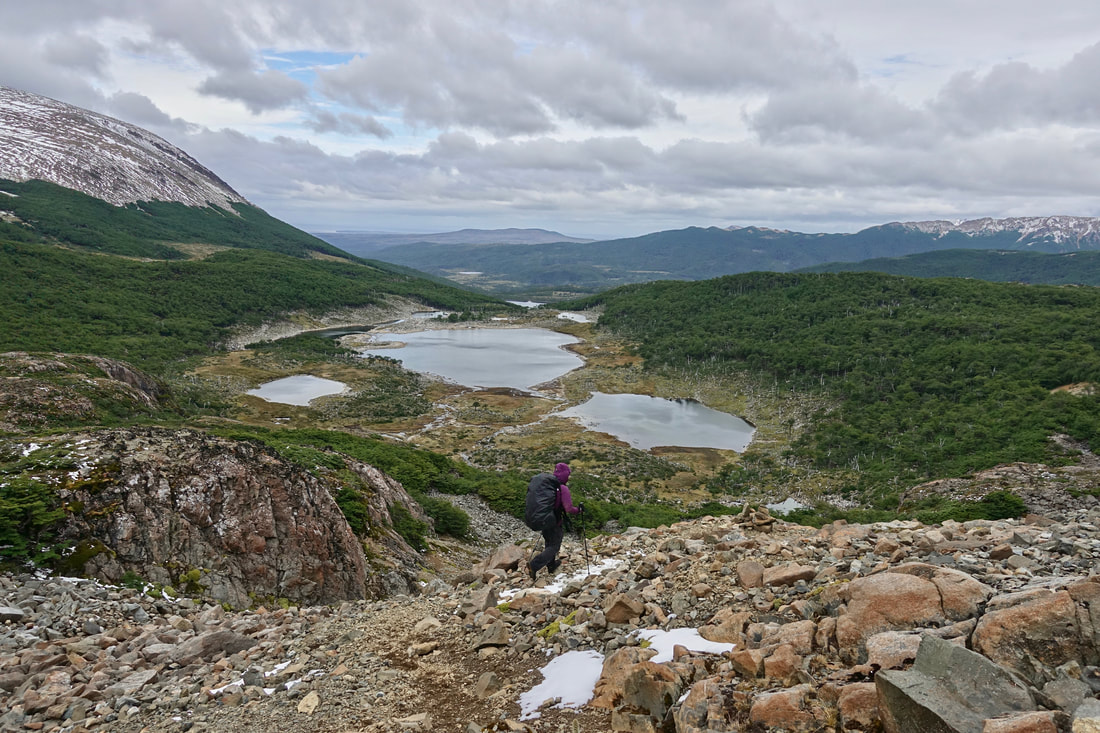 Most of the snow had melted by afternoon 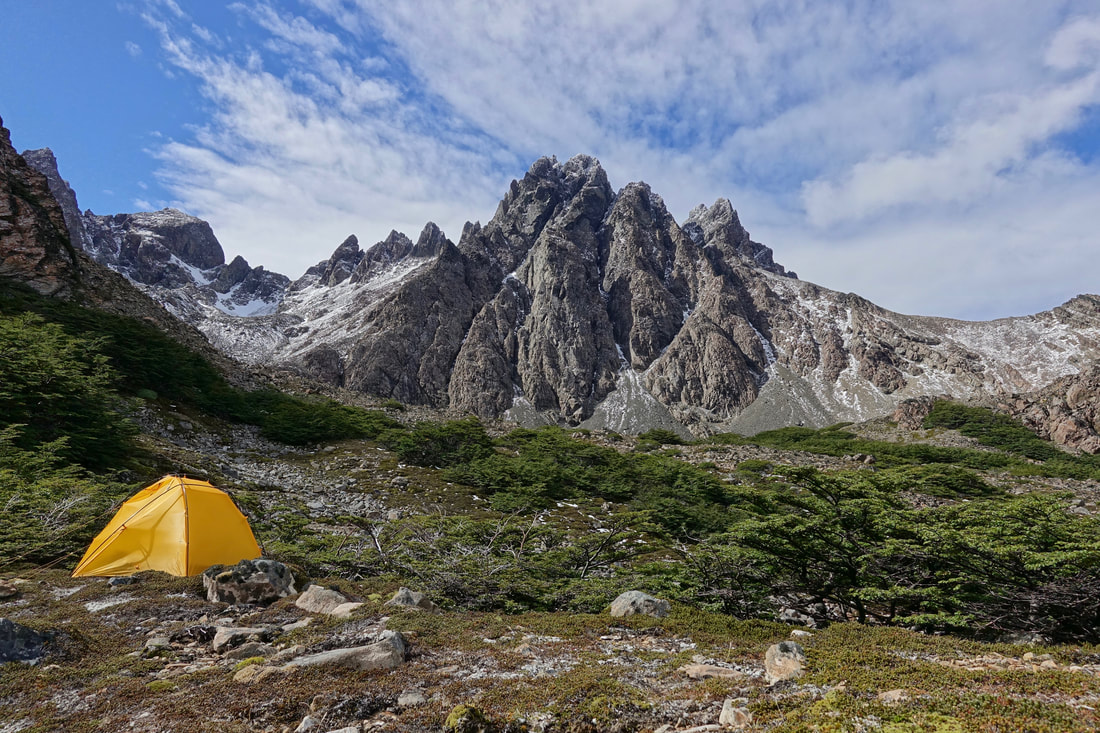 My favorite area of the walk was around Laguna de los Dientes.  The majority of the walkers followed the outline in the Lonely Planet guide and camped at Laguna Escondida instead 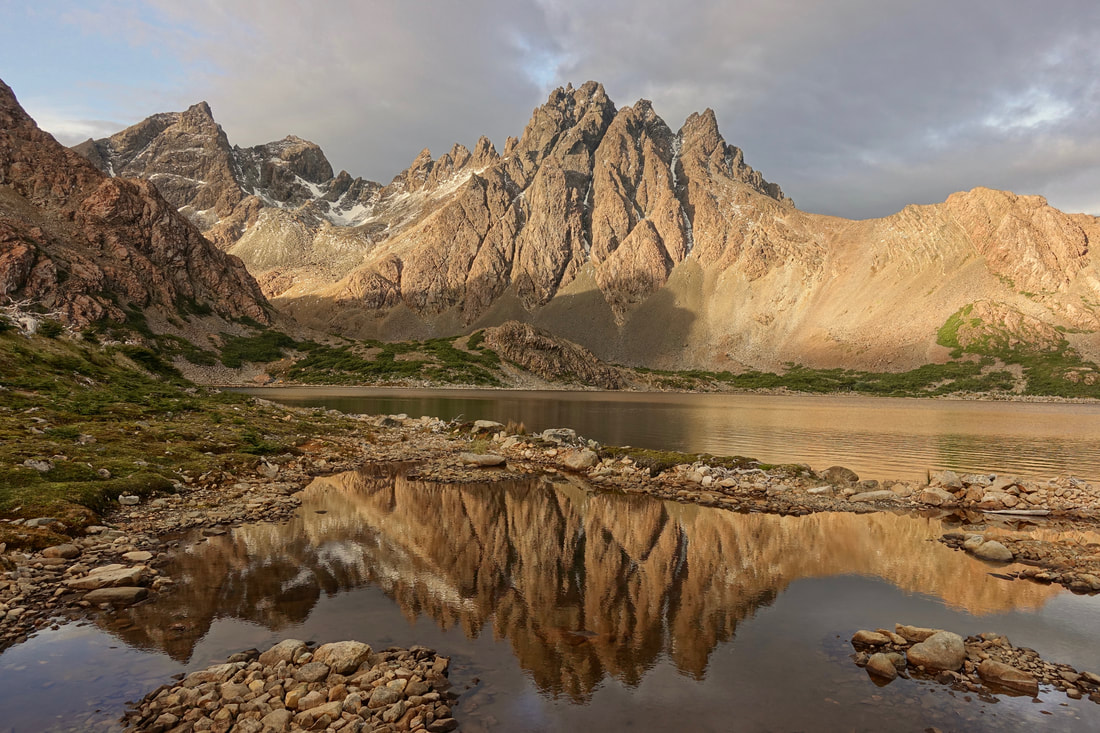 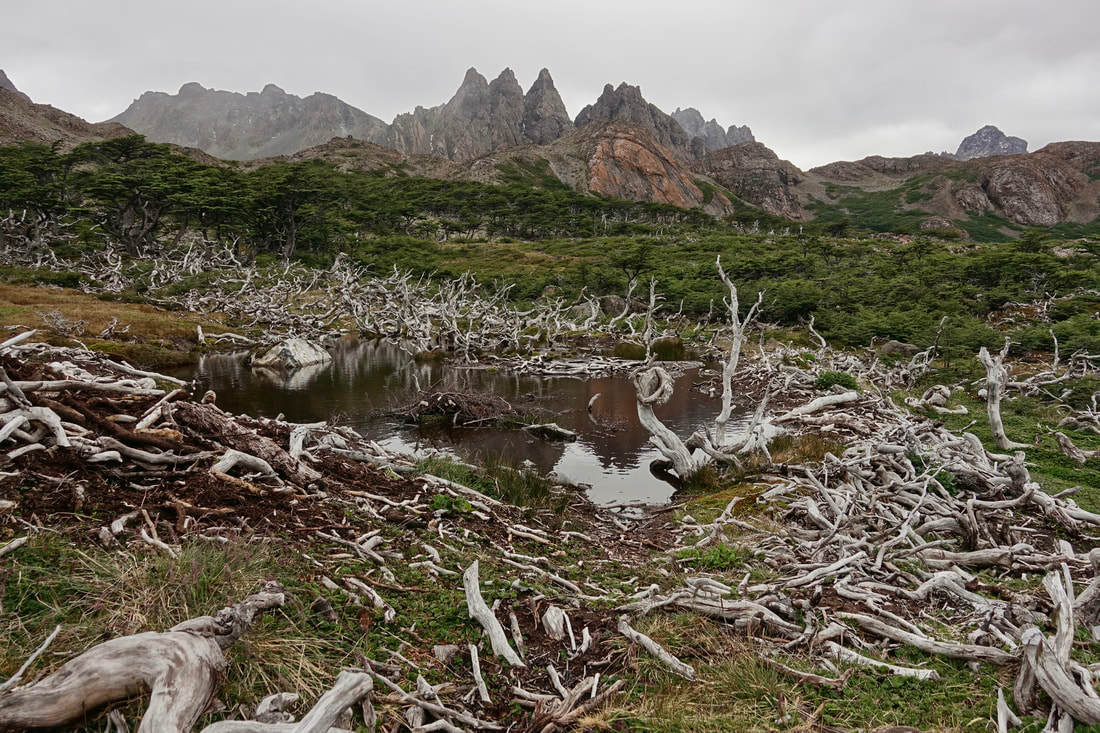 The downside to the walk are the boggy areas and beaver damage in the valleys.  I had pizza with beaver meat in town to do my part in contributing to the decline of the species 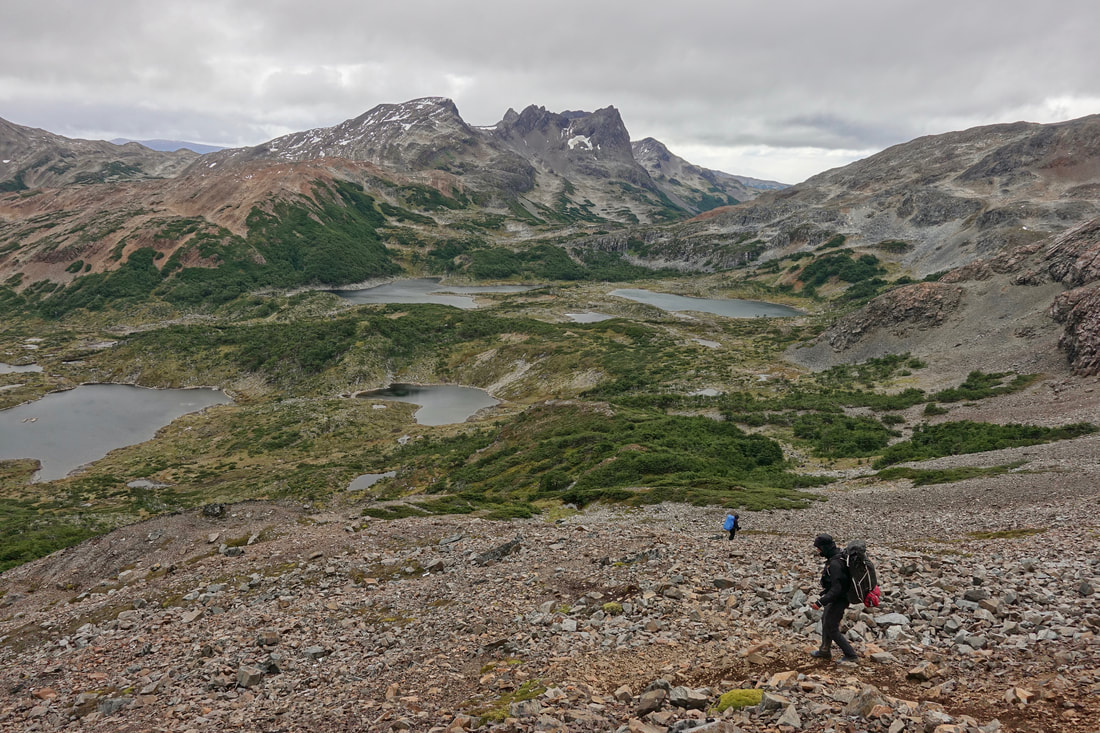 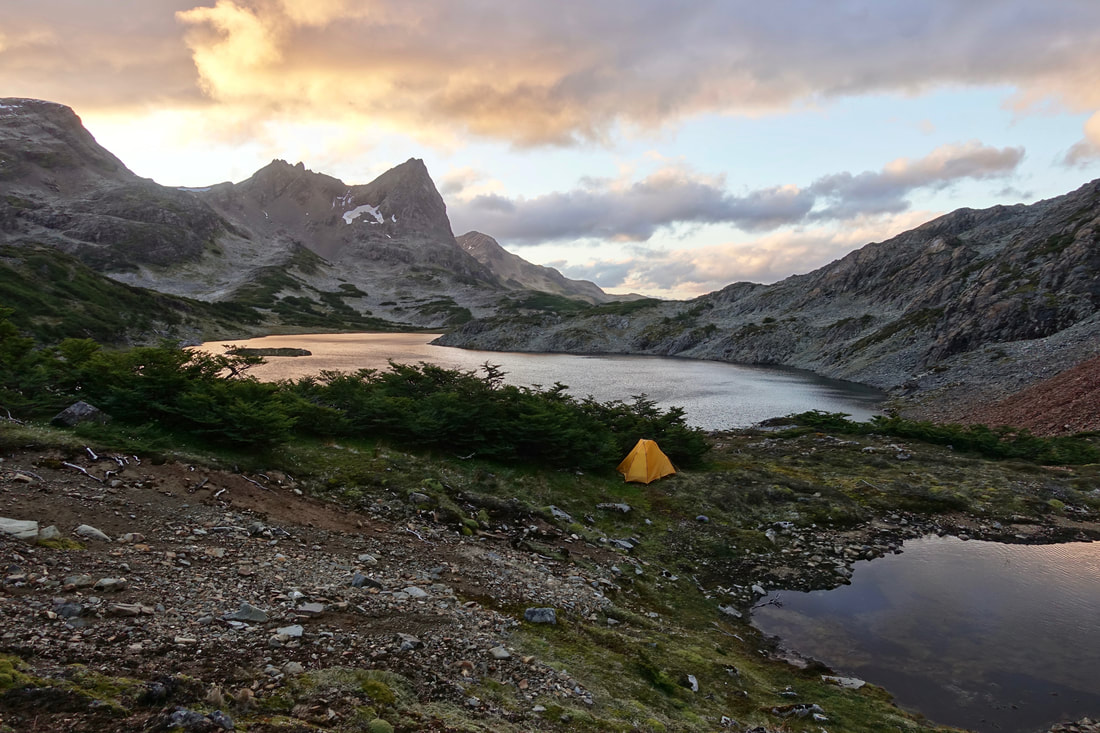 Camp behind the bushes on a windy night at Laguna Hermosa 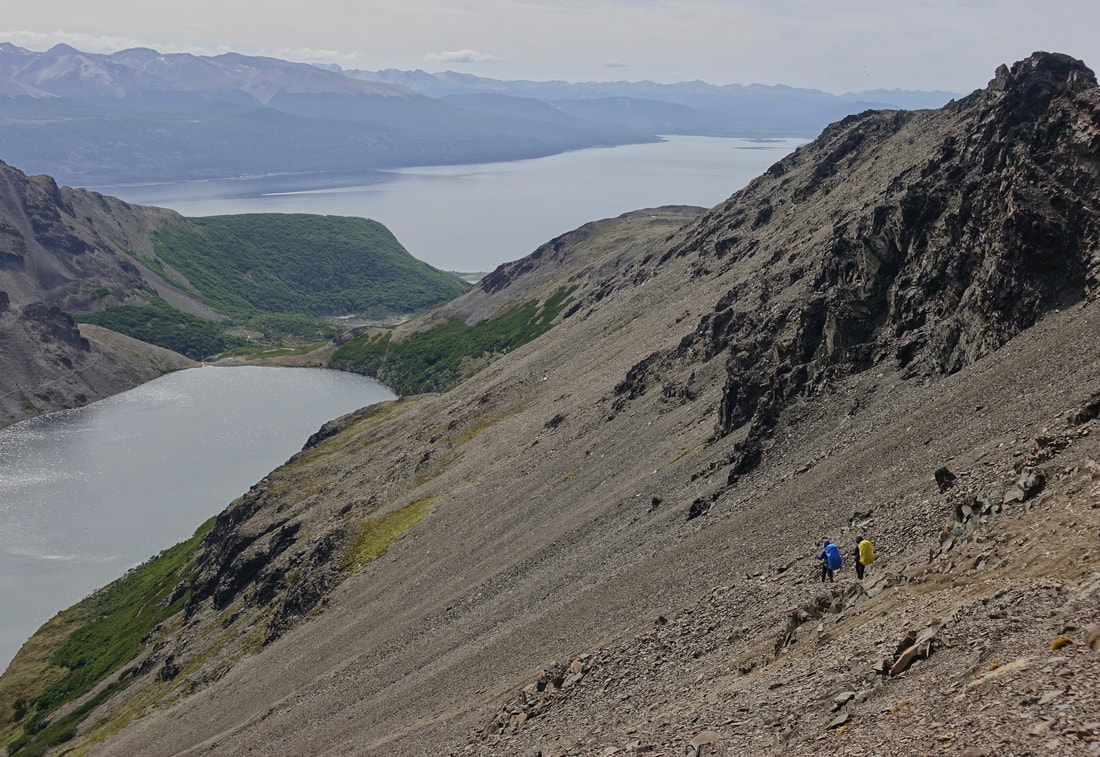 All downhill from Paso Virginia, once the road is reached there is a five mile walk back to Puerto Williams
Resources
Torres del Paine Park Map, El Chalten Hiking Map

Map of Driving directions from Torres del Paine to El Calafate:  The roads are well marked in terms of which city you want to go to next and I had no problems using this map alone.  I would continue on the paved road to Esperanza instead of taking the shortcut dirt road to El Calafate (seen in green on the map).  There is a major gas station in Esperanza and I got fuel from a smaller station in Tapi Aike.  There are no gas stations on the Chile side until you drive a few hours south of Torres del Paine to the town of Puerto Natales.  The border crossing on the Chile side is called Cerro Castillo, and Cancha Carrera on the Argentina side.  Hertz was the only company from the Punta Arenas airport that would allow rental cars to cross the border to Argentina.