Blue Hole panorama, Waialeale Canyon
Distance: ~14 miles roundtrip if walking the access road from Keahua Arboretum
Trailhead: Parking lot at Keahua Arboretum, follow 580 west from Wailua until reaching the stream crossings. If you have 4WD you can continue further along the access road to reduce about 6 miles of road walking
When: Rainfall in the canyon is spread out evenly throughout the year raining an estimated 300+ days per year

The trek to the "wettest spot on earth" is mostly rock hopping up the Wailua River. The river leads to the Weeping Wall, a cascade of waterfalls down the Waialeale Crater. Access to this hike is difficult so you likely will have the canyon to yourself. Helicopters overhead are seen throughout the day as the canyon was the backdrop for the Gate opening scene in Jurassic Park

Jurassic Park Gates
I parked at the Keahua Arboretum at the end of 580 and walked the extra miles in the morning. There is a good overview map on HawaiiGuide.com with landmarks such as stream crossings and the Jurassic Park gate to help with the access road 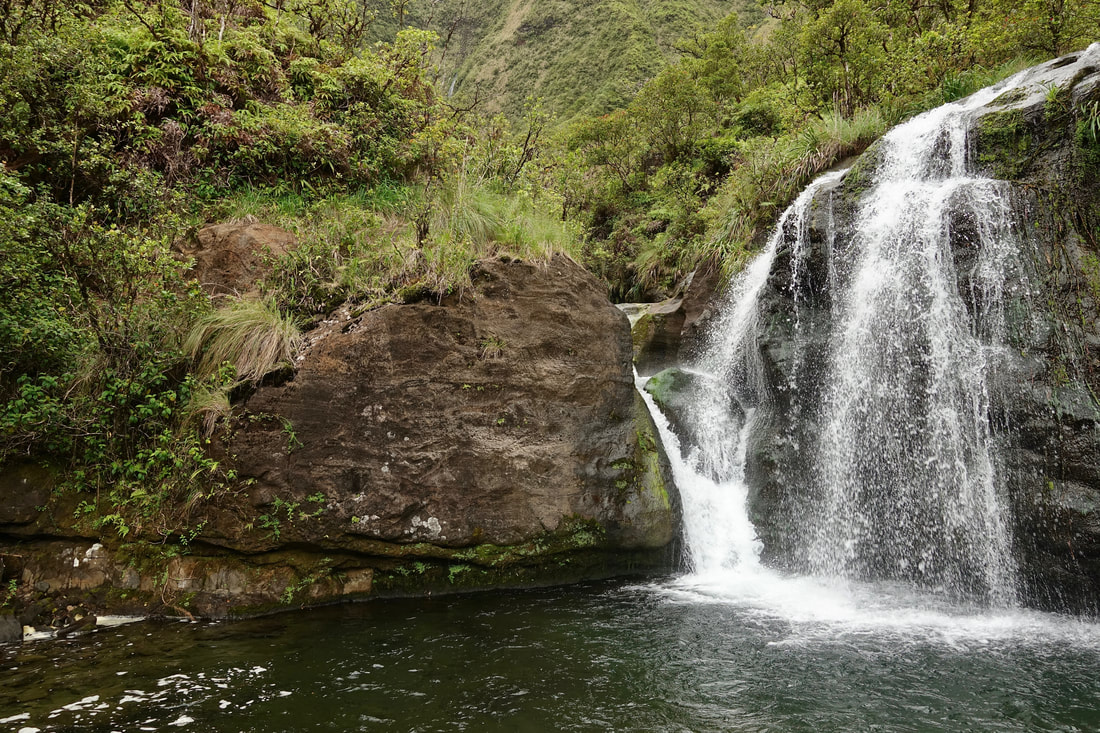 After reaching the end of the road, stay alongside the river until reaching this waterfall known as Guardian Falls. The correct paths should always be within listening distance of the main Wailua. If needed walk in the river itself until a path is spotted and avoid taking one of the hunter trails deeper into the forest. Climb the path on the left side of the picture above and continue along the stream in the center of the frame 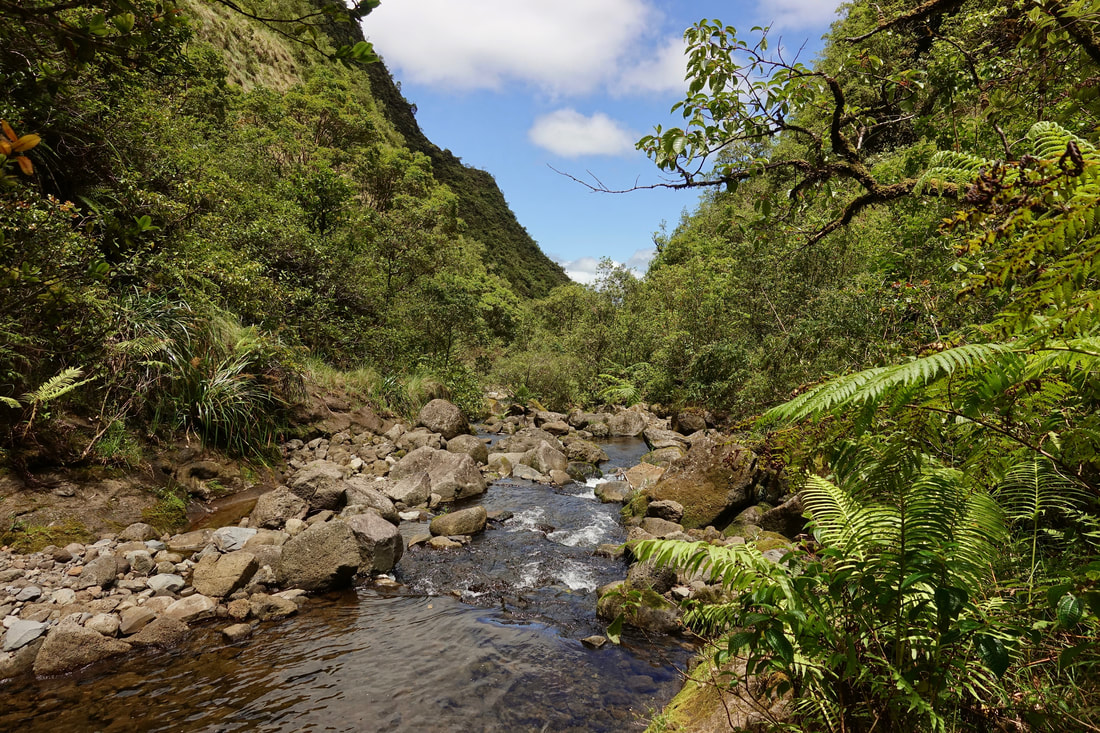 The paths are less defined after Guardian Falls, pink flags have been mostly removed as of May 2019 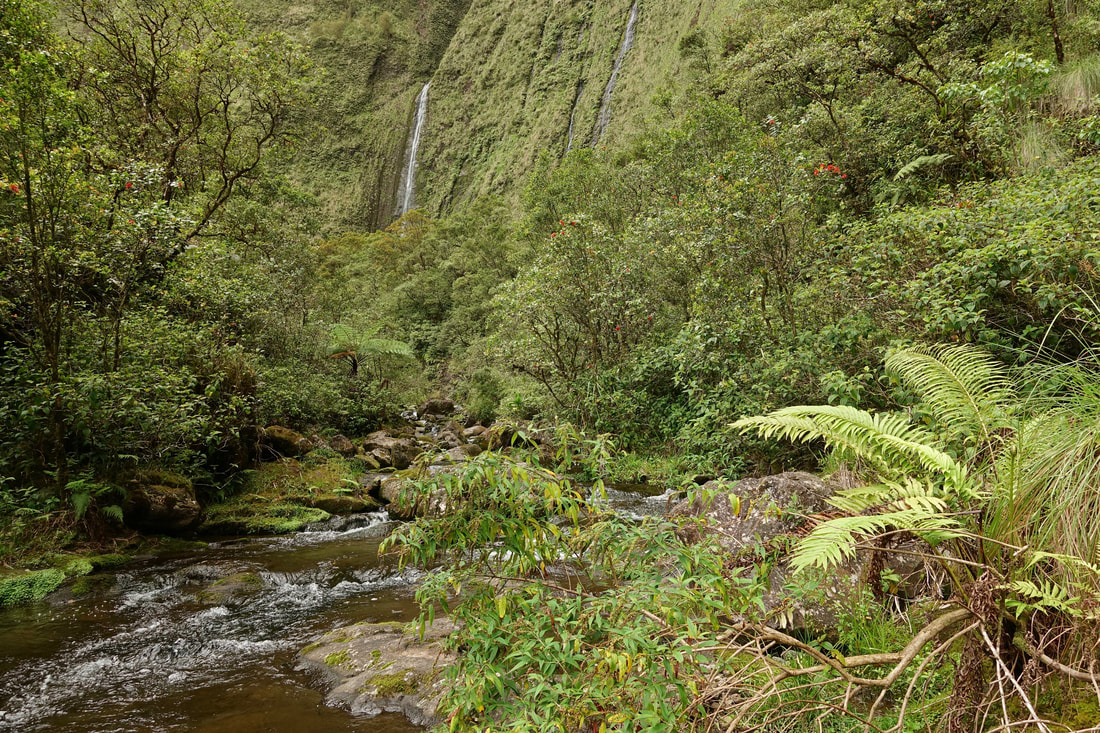 The easiest route is following the main stream in the northern canyon, a waterfall will come into view on the north face of the crater 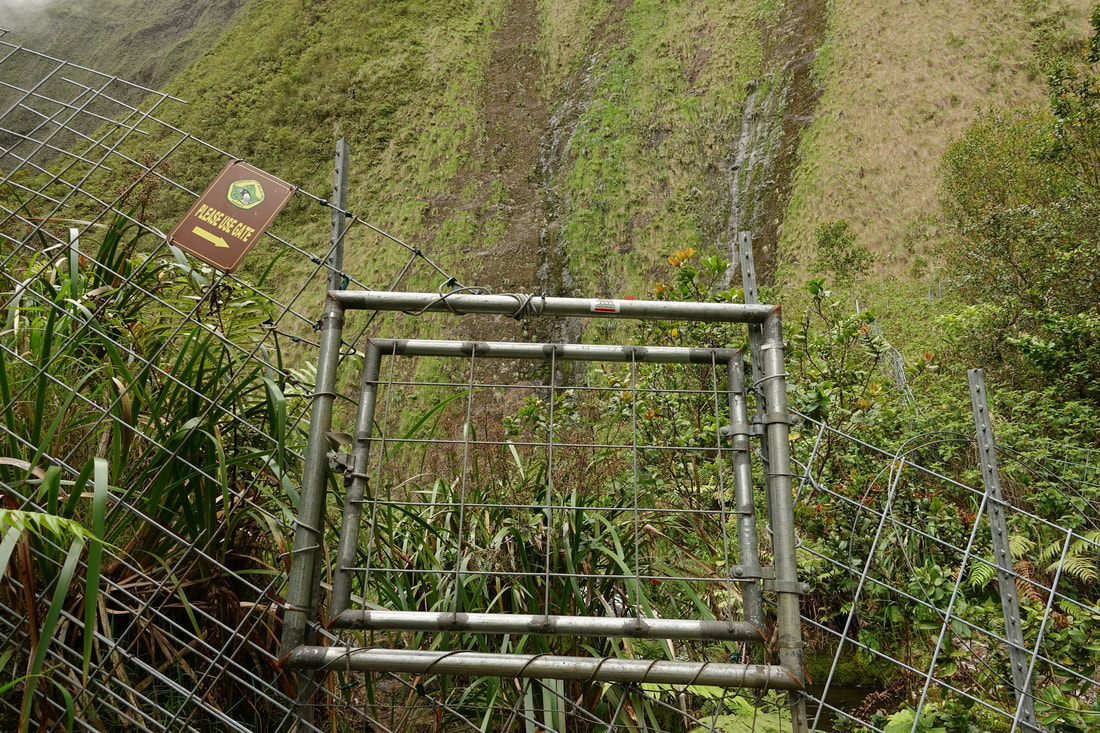 The northern stream leads directly to a gate in the fence, which was installed to keep hogs and goats from the Inner Sanctum. The gate is a good landmark as there is a well defined path for the remainder of the walk 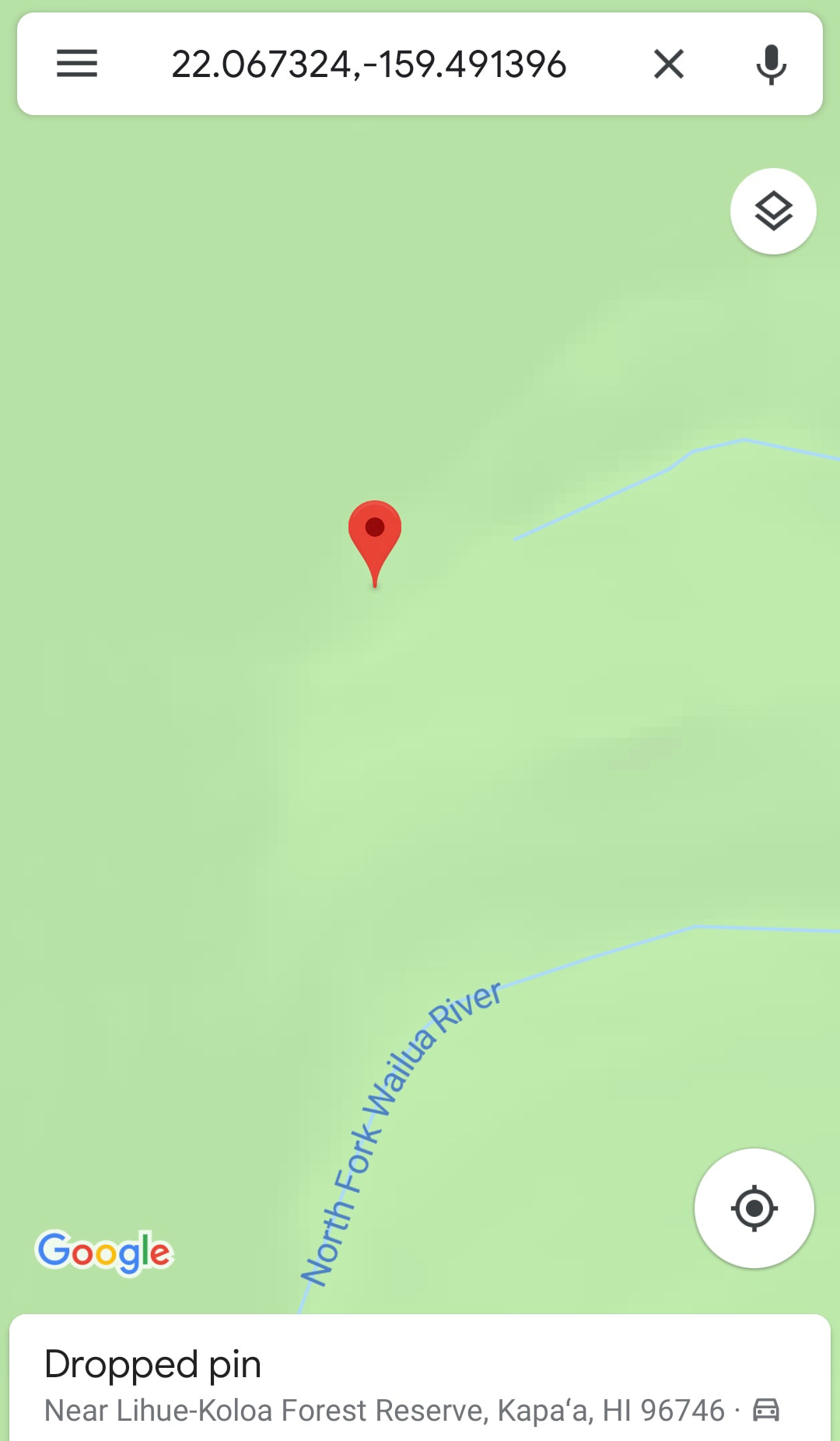 Location of the gate on Google Maps 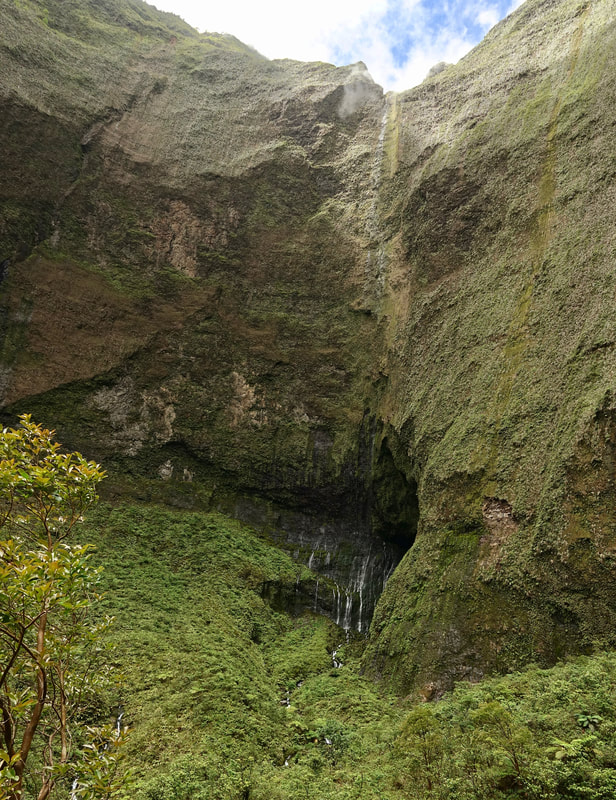 First view of the Inner Sanctum 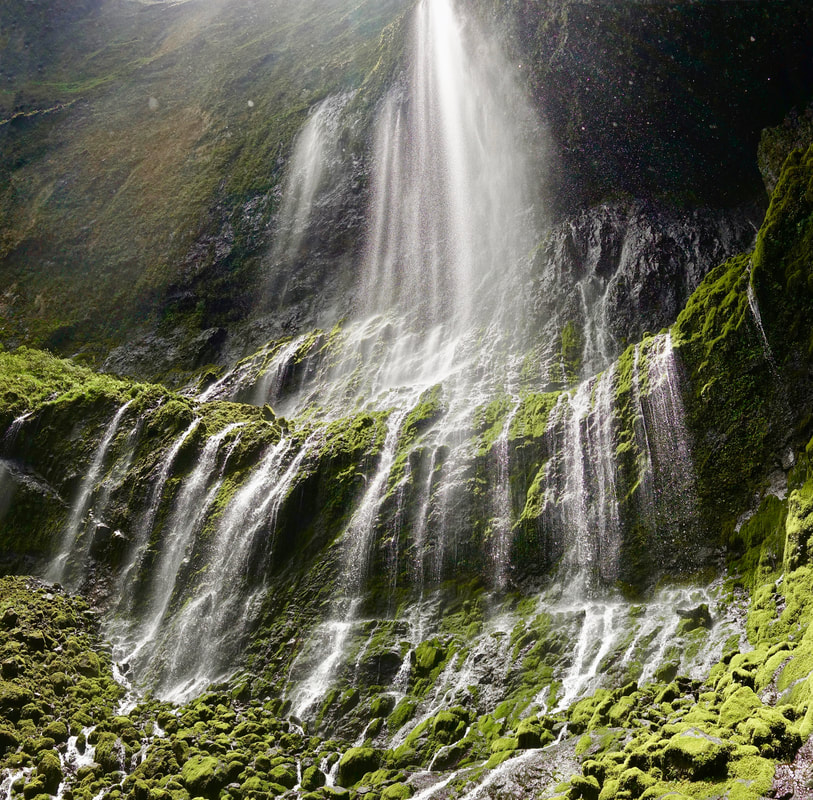 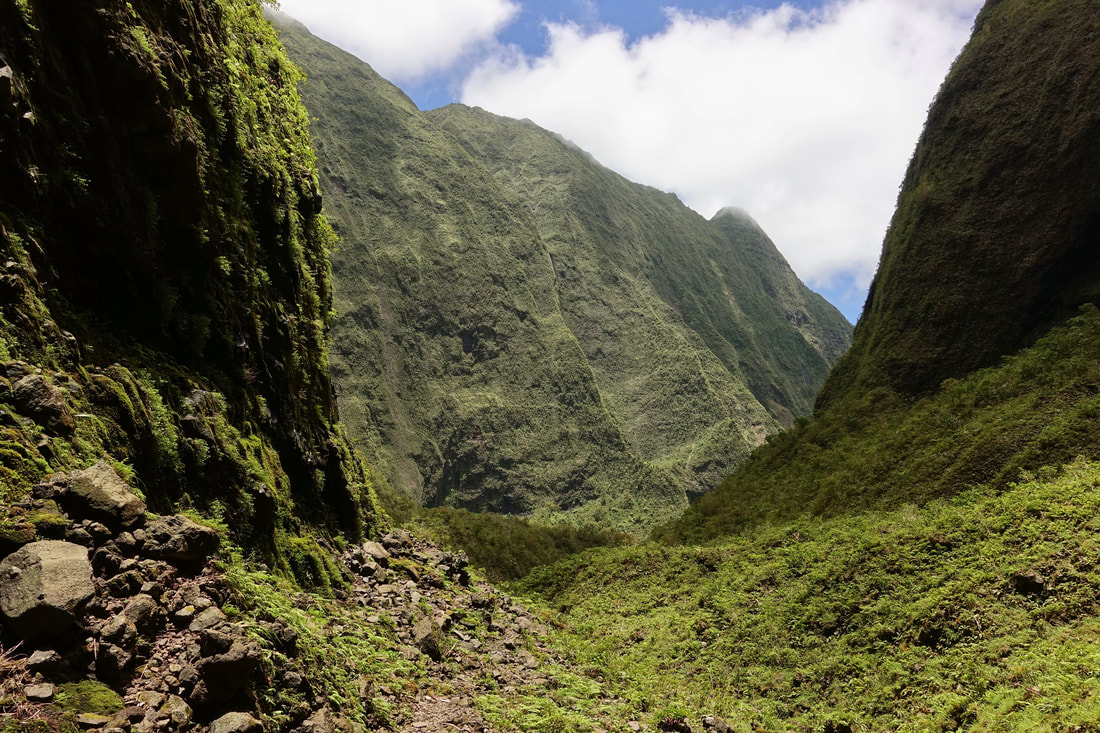 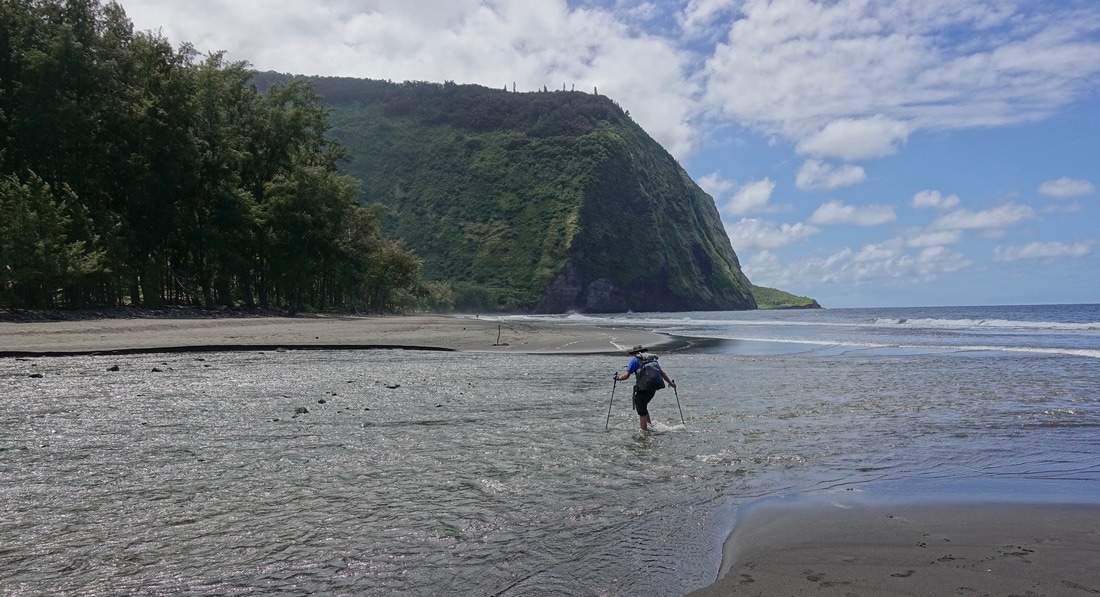 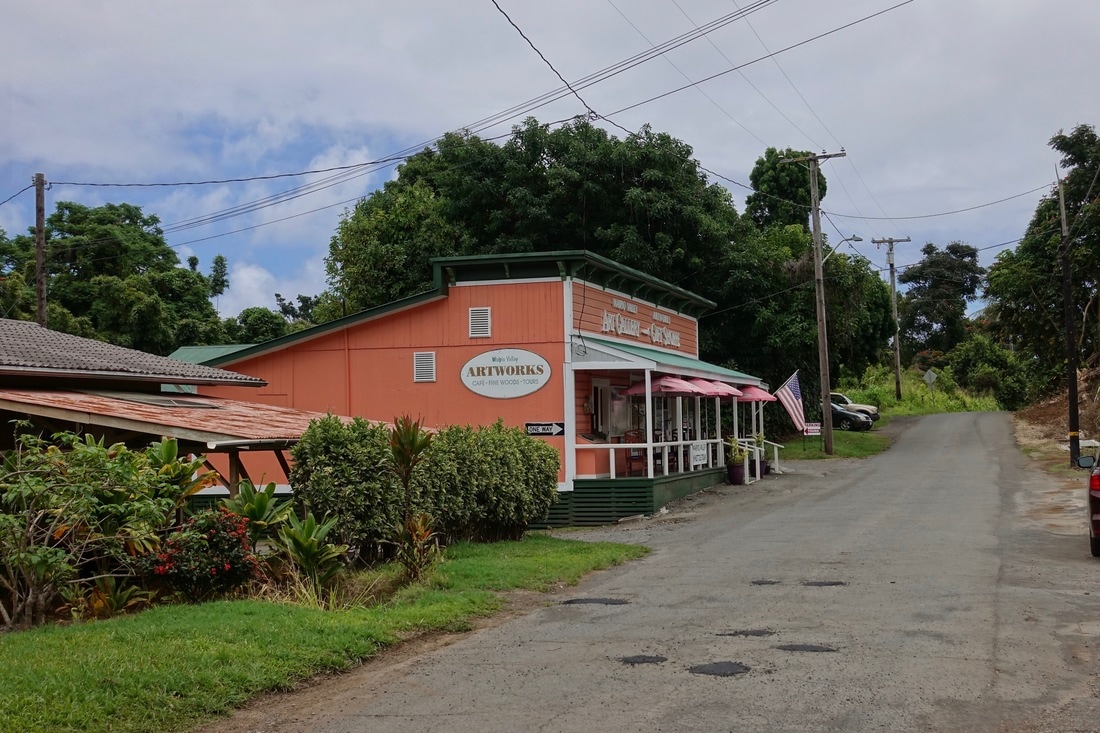 I parked at Waipio Valley Artworks (for a daily fee), no overnight parking is allowed at the Waipio Overlook 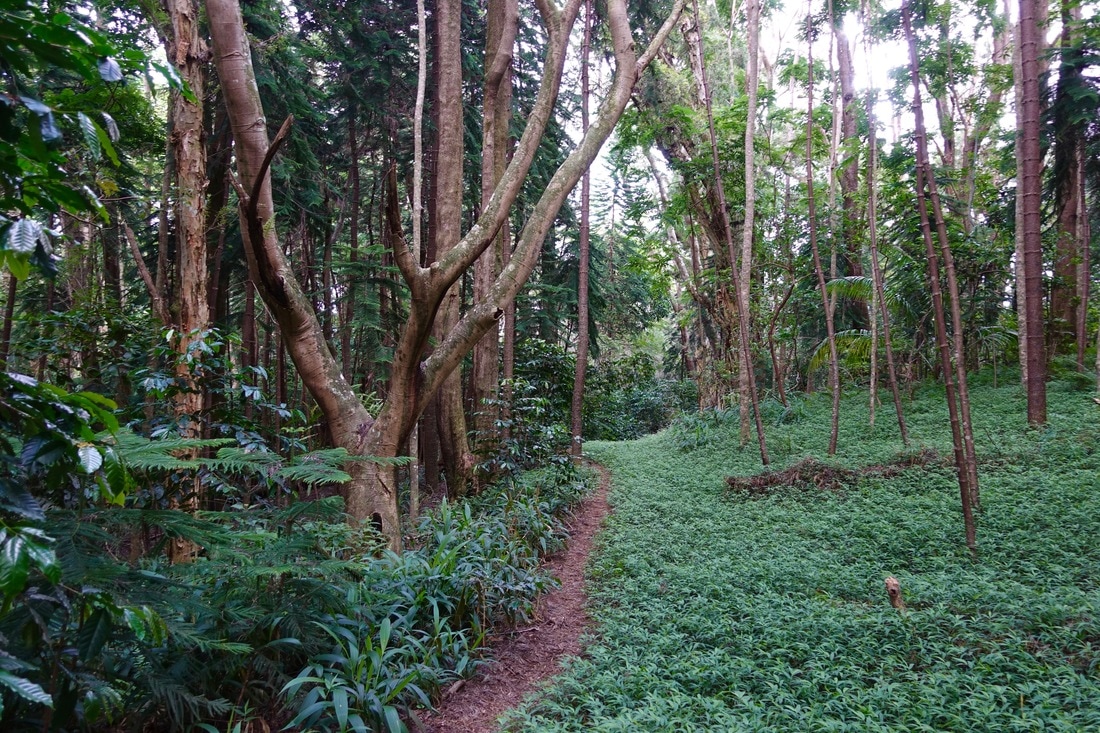 The trail climbs at the end of Waipio Beach and goes through the jungle.  There are many streams to cross on the trail 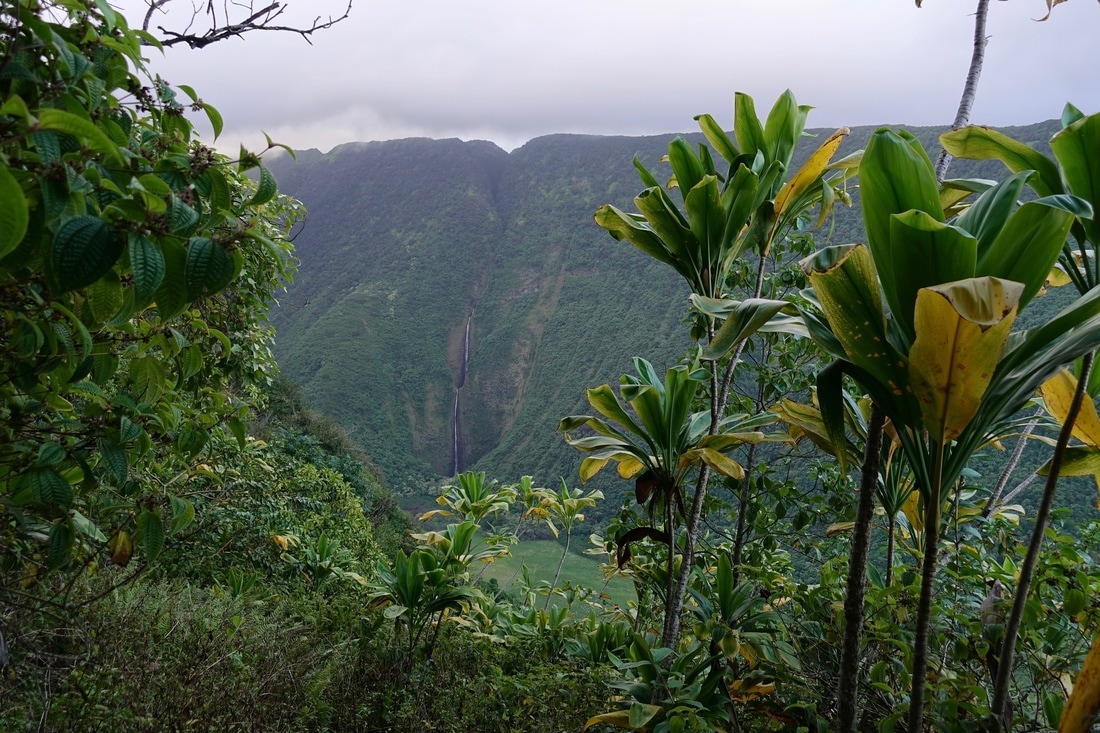 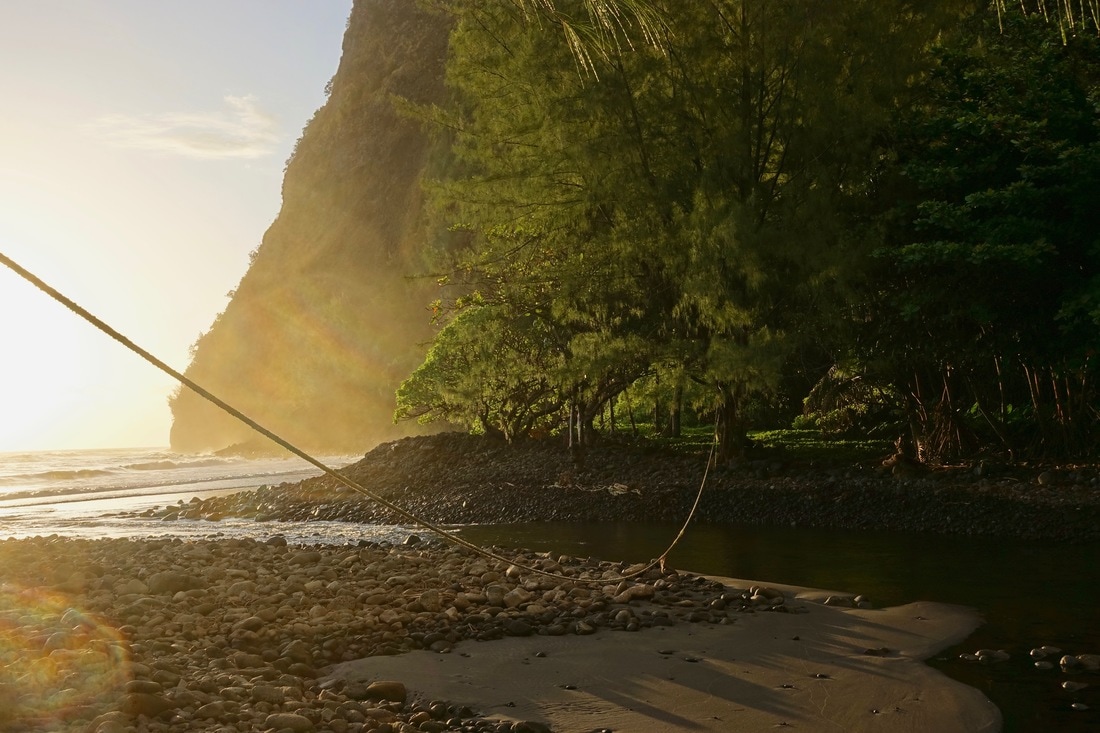 Waimanu creek is the final river crossing to reach camp 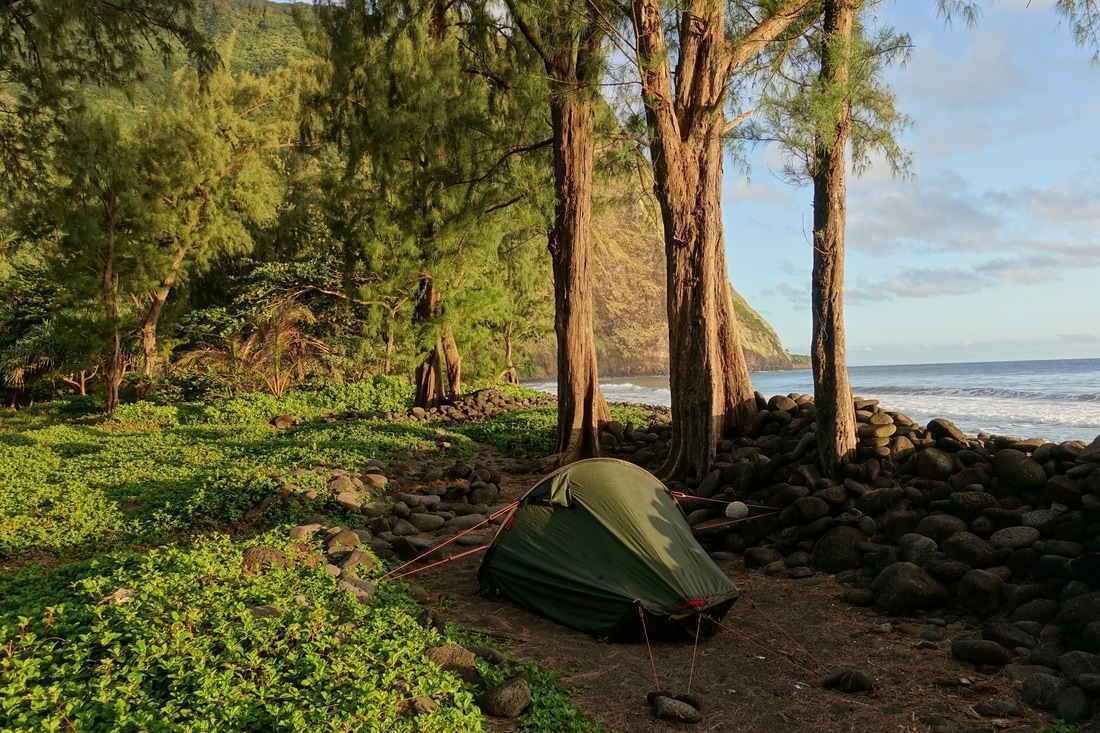 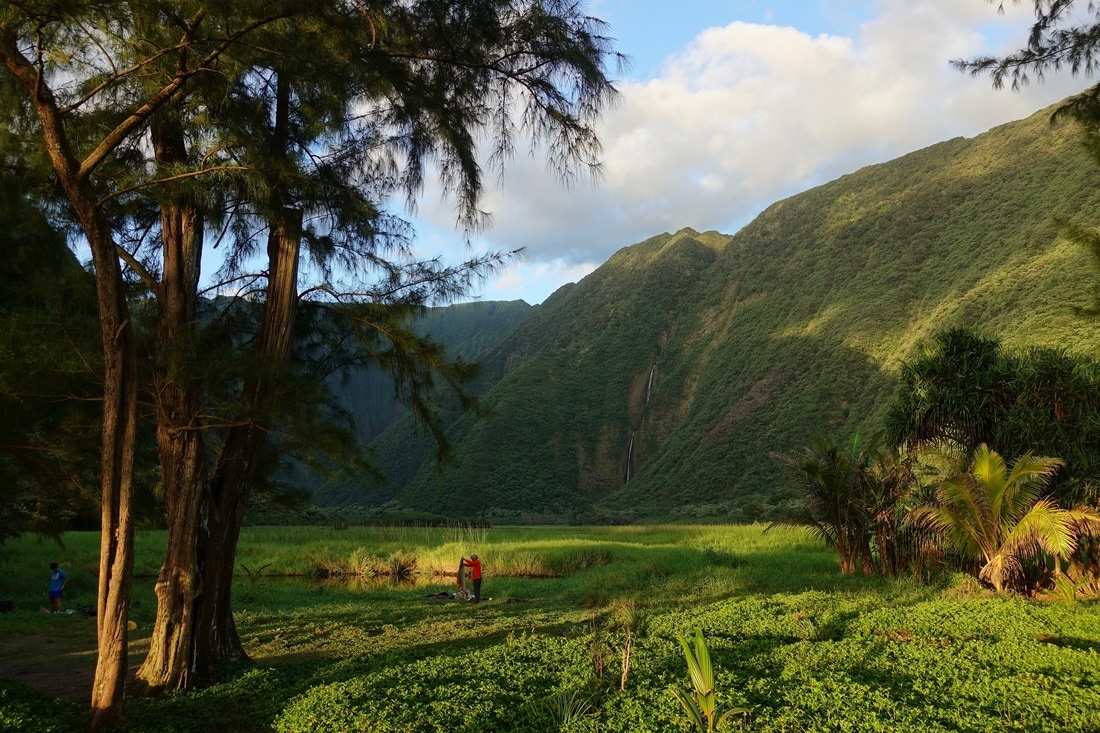 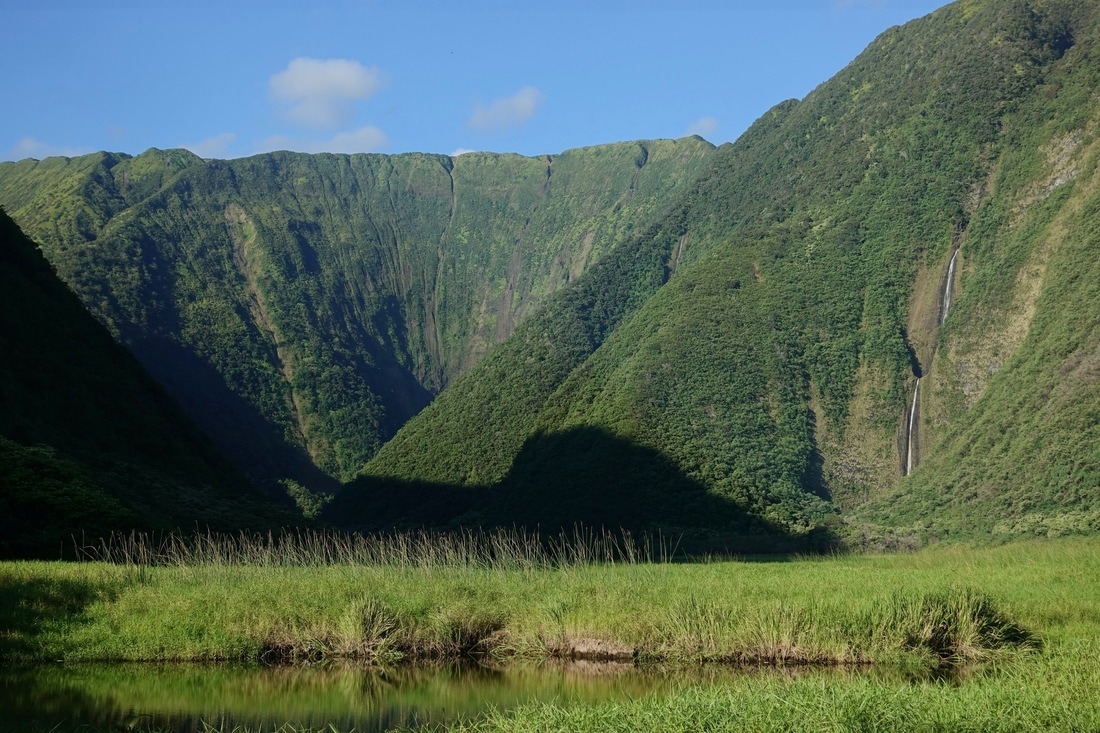 I mostly rested on the day in the valley, the weather was perfect 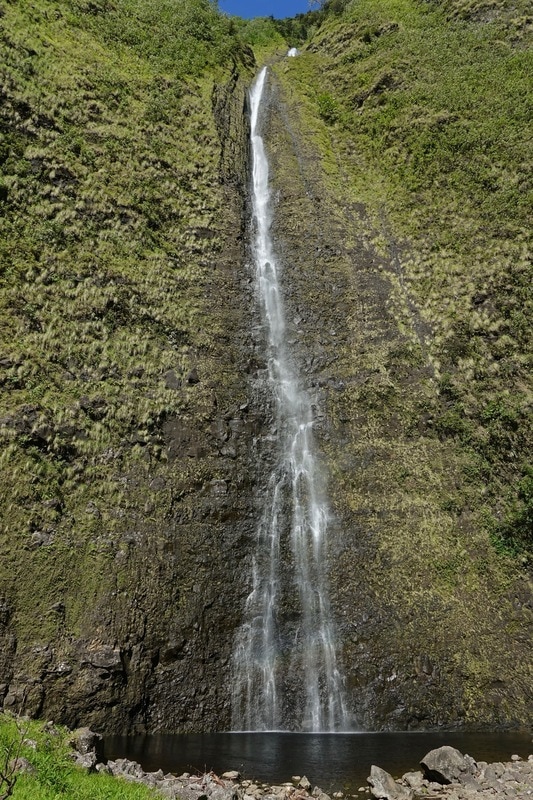 I was excited to find this large swimming pool at the base of Wai'ilikahi Falls, the water was very cold!

Much like the Blue Hole hike, there are helicopters above every fifteen minutes. The trail that leads to the falls is faint and starts near campsite #9. I had some encounters with wild hogs, but they were skittish and ran away

There were no surface flows in the park during my visit, the best way to view the lava was from the ocean on a boat

There was also a distant viewpoint from land, above is the steam cloud on the hike from western end (Chain of Craters road) 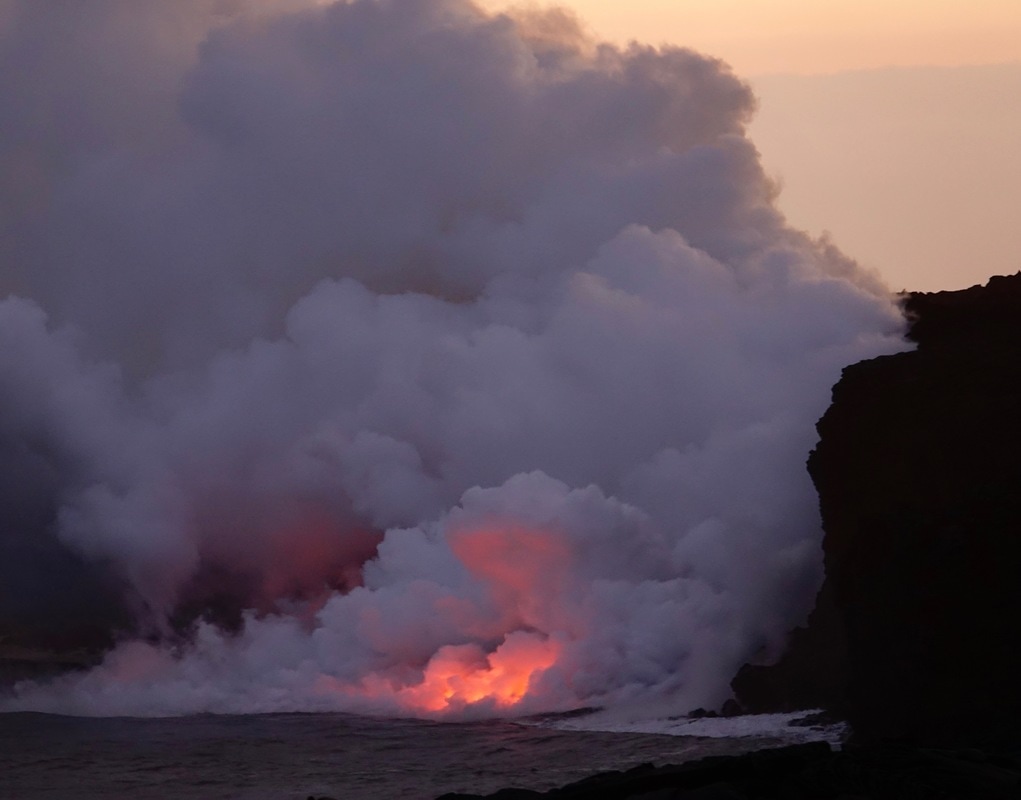 The hike was shorter coming from the eastern Kalapana side (8 miles return).  I rented a bike and covered most of the distance on the emergency road

​One hour before sunset (no lava visible)

The stars before the sunrise are impressive as well.  Haleakala Bike Co. allows you to bike down at your own pace, instead of with a group, which allows you to stop halfway to rest your hands (from braking) at Kula Lodge for breakfast.

The Awaawapuhi trail leads to this viewpoint